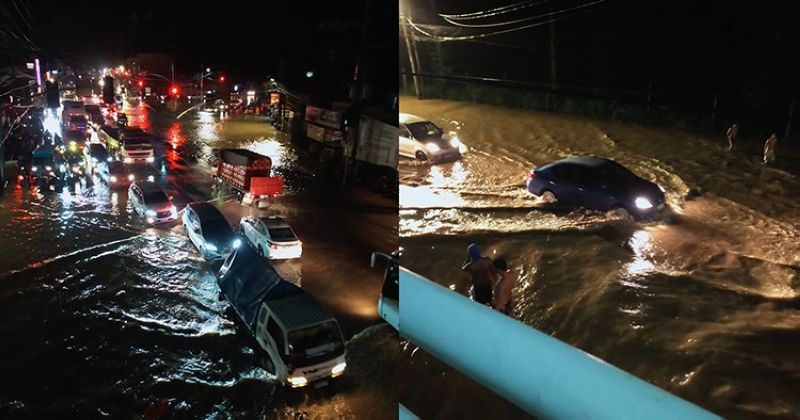 UNCOLLECTED and improperly dumped garbage that clogged the drainage system and canals, siltation, and structures built above waterways have contributed to severe flooding in the city on April 10, the City Engineer's Office (CEO) reported.

CEO head Joseph Dominic Felizarta said based on their assessment, with the reports from the City Disaster Risk Reduction and Management Office (CDRRMO), the heavy rain carried the uncollected garbage during that time.

"Napuno og mga basura ang atoang mga kanal. Siguro during that time, wala pa makolekta ang ubang basura niawas na sa garbage bin, nikalit man to og ulan sa gabii. So nanglutaw, didto ni-clog sa atong mga drainage (Our canals were full of trash. Maybe that time, the garbage was not yet collected and the bins were already brimming so when it rained heavily that night the garbage flowed to the canals and clogged our drainage),” Felizarta said in an interview on 87.5 FM Davao City Disaster Radio.

Felizarta added that more water flowing from newly-constructed buildings had also contributed to the clogged canals.

“Because of development, daghan na kaayo ta’g mga building, karon during the time mag-ulan ang mga building mag-produce pud og mga tubig. Ang iba naka-clog na sa atong mga kanal, naay mga driveways na kailangan na nato i-check. That’s why kung magkuha sila og building permit, ginapakuha gyud nato sila og drainage clearance sa City Engineer’s Office (We have many buildings now and when it rains water flows from the buildings. Others clog our canal, there are driveways that we need to check. That is why when they apply for a building permit, we require them to get a drainage clearance from the City Engineer’s Office),” he said.

Felizarta also revealed that another reason for the flooding are the illegal settlers on top of the drainage systems.

He said these structures are built on public property.

Felizarta also cited that some drainage systems are located under private properties. He said that private property owners should also give way to existing creeks. According to the law, they should not change the flow of water or add a burden to creeks.

He said the CEO team will be checking the outfalls (drainage) whether they are already silted, including the newly constructed drainage such as in Matina Crossing.

Regular inspection and cleaning of pumping stations are done by the Ancillary Service Unit (ASU) and City Environment and Natural Resources Office (Cenro).

Cenro head Marivic Reyes, meanwhile, defended her office, which has been blamed by some residents for delayed garbage collection, especially in flood-prone areas.

She admitted, though, that there are some factors that contributed to the delays in the garbage collection, and these include dumping delays brought about by some issues in the New Carmen sanitary landfill in Tugbok, or some trucks were not able to collect on schedule due to heavy traffic.

"Kanang ginasulti sa uban nga usahay dili nila masabtan among sitwasyon nga dili dayon makuha, dili man siguro sa tanang adlaw nga dugay makuha (For those who say that they could not understand why there are delays in garbage collection, it is not every day when we experience delays)," Reyes said.

She added that their trucks, which are mostly rented, have to dump their collected garbage at the landfill halfway through their collection schedule as the trucks are already filled.

While she admitted that uncollected and improperly dumped garbage clogged the drainage system and canals, she said it is unlikely that the garbage is coming from those collection points.

She added that some people do not throw their garbage at the designated garbage collection points, leaving their garbage uncollected.

The lack of segregation also added the problem of plastics getting into the canal.