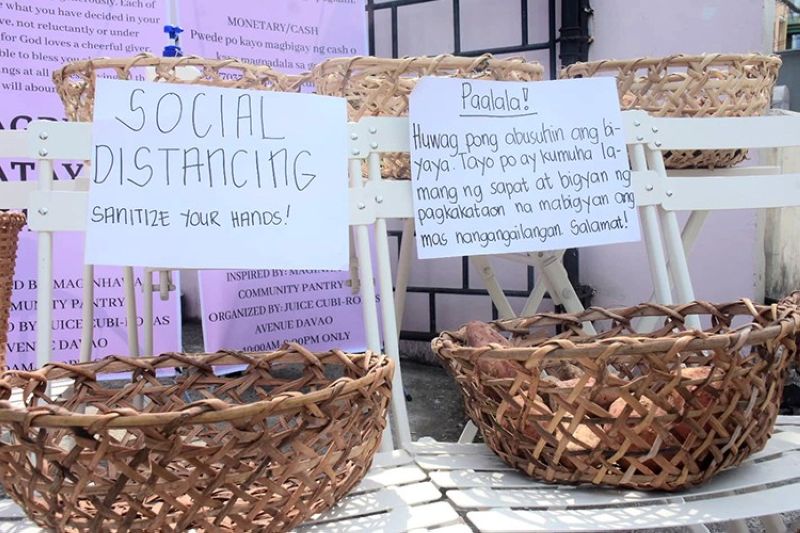 LOCAL authorities advised the public to be wary against community pantries that are being used for politics and other hidden agenda.

Department of the Interior and Local Government (DILG)-Davao Director Alex Roldan said in a press conference on Thursday, April 22, that with the continuous pop-up of community pantries around Davao City, there is a need for organizers to coordinate with the local government unit (LGU).

Roldan said they are not opposing the initiative of various groups in establishing their own community pantry, as its intention is to help those who are in need.

There have been community pantries that were formed by various sectors in Davao City and some parts of the region after being inspired by the Maginhawa Community Pantry in Quezon City.

The concept of the pantry aims to help less fortunate and encourage others to donate and share their blessings.

Roldan said, however, that some groups allegedly affiliated by the Communist Party of the Philippines (CPP), as reported by National Task Force to End Local Communist Armed Conflict (NTF-Elcac), are taking advantage of this initiative for their political agenda.

This, after reports in Metro Manila said that some organizers of the community pantries were spreading pamphlets with contents of overthrowing the current administration.

Meanwhile, some pantries, which were reported to have been profiled by police authorities, suspended their activity due to fear of “red-tagging.”

Roldan, meanwhile, denied that they are “red-tagging” anyone, but he believed that some groups are taking advantage of this initiative.

“We would be too naive not to believe that this will be used by the other side for their political end,” the DILG head said.

He said, though, that they have not yet monitored any progressive group that has reportedly taken advantage of the community pantry.

Despite this, Roldan said they are supportive of the community pantry concept, as it keeps the Filipinos’ bayanihan (teamwork) spirit alive.

He added this is up to the discretion of the public.

“We encourage the people, those who have, to help. However, they should not allow themselves to be used for political ends,” Roldan said.

The DILG official called on the public to stop politicizing charitable activities, such as the establishment of community pantries.

“Ang gihimo sa kabila is para bang insulto sa mga tao (What the other group is doing is an insult to those) who are honestly helping, and then ma-drag sila sa (they would be dragged in the) issue of red-tagging,” Roldan said.

Roldan said they welcome anyone, even the progressive groups, to stage their own community pantry for as long as they will strictly observe the minimum health protocols.

Meanwhile, he reiterated that those who wanted to organize a community pantry must coordinate with their respective barangay leaders or local government units (LGUs) to ensure that health protocols will be followed.

Securing a permit is no longer required, Roldan clarified, after DILG Undersecretary for Barangay Affairs Martin Diño said in an interview with ANC that organizers of community pantries nationwide must apply for a permit from local authorities.

In a recent interview, Roldan said there is a need to coordinate with LGUs to ensure that the public will not be in danger and the food that will be donated and served is safe for consumption.

“I did not issue any such directive. Ang importante dito, yung tao is binibigyan ng pagkain, nagbe-benefit sila, oh di ayos ‘yun (What is important is that the people are benefiting from it, as they are given food, then we have no problem with that),” Escobal said.

He also reminded to be wary against community pantries that are being used to overthrow the government.

He still encouraged them to stage their own pantries, for as long as they will abide with the law.

“For as long they won’t violate any law, then it is OK. We will even provide them security, but if they would do it to urge people to join in their movement, na mag-disrupt sa atong (that could disrupt our) peace and order, that’s a different story,” the police official said.