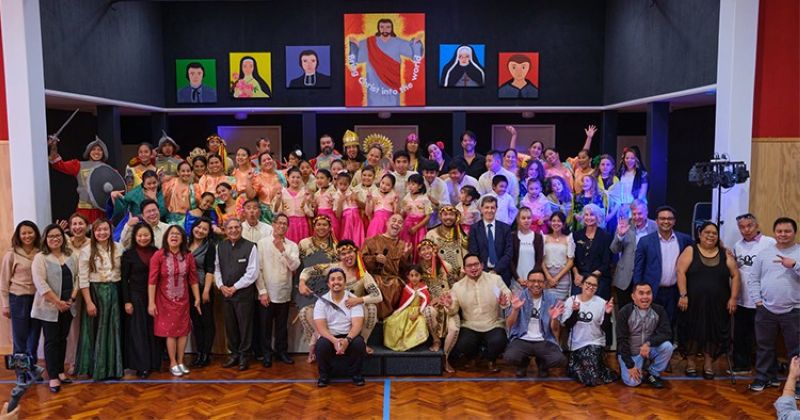 A FILIPINO community in Hamilton, New Zealand celebrated Saturday, April 24, the 500 years of the arrival of Christianity in the Philippines through a cultural show.

The Grand Quincentennial Celebration, held in Hamilton City, was organized by the Waikato Filipino Association and the Filipino Chaplaincy-Catholic Diocese of Hamilton, said SunStar Cebu columnist Mel Libre, who is also the coordinator of the quincentennial celebration in Hamilton.

“We had a Holy Mass celebrated by Vicar General Leonard Danvers; the 500-Human Formation and the Grand Sinulog Dance as ground presentations; and the Quincentennial Cultural Program that had re-enactments of the First Baptism, the Battle of Mactan and the return of Sebastian Elcano to Spain for the First Circumnavigation of the world,” Libre said.

“The Waikato Hispano Latino Cultural Trust participated in the cultural program,” he added.

Below are some photos and videos of the event.

The event was also graced by the mayor of Hamilton, Paula Southgate; the Ambassador of Spain to New Zealand Fernando Curcio Ruigómez; Filipino chaplain Fernando Alombro; and members of the Hamilton parliament.

Waikato Filipino Association is a social and cultural non-profit organization that was founded primarily to preserve and promote Filipino ideals, values, culture and tradition, especially song and dance, among Filipinos and Filipino/Kiwi families.

“We have participated in local community activities for the past few years and thus have a close cultural relationship with other cultural groups in the Waikato and New Zealand as a whole,” the group said in its Facebook page.