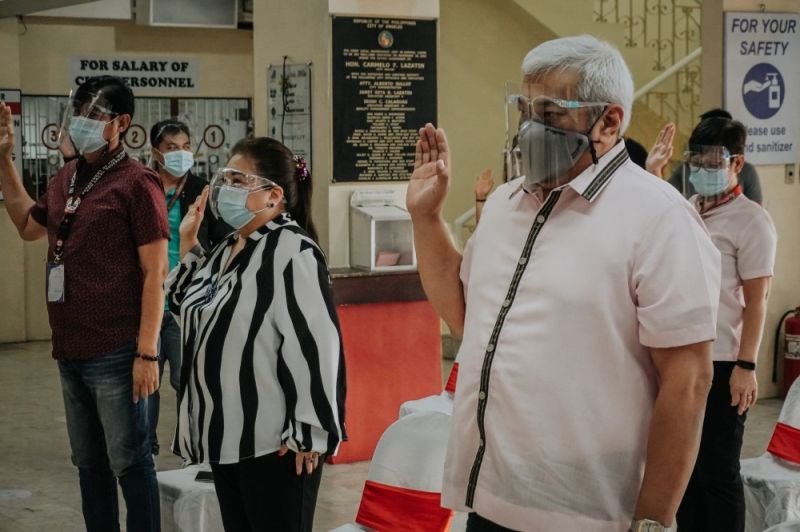 RECOGNIZING the valor, heroism, and bravery of Filipinos, Mayor Carmelo Lazatin Jr. led Angeles City’s celebration of the 500th anniversary of the Victory of the Battle of Mactan by joining a nationwide simultaneous flag raising ceremony on April 27.

“This historic victory has always signified the unmatched bravery of the Filipino race who stood up against foreign aggressors,” Lazatin said.

The said initiative, which is part of the 2021 National Quincentennial Commemorations, was released through Memorandum 761, Series of 2021 of Lazatin, Executive Assistant IV Reina Manuel said.

“Part of this commemoration is also the introduction of Christianity in the Philippines, and the role of the country in the first circumnavigation of the world. And this is something that we should always remember and be proud of,” said Vice Mayor Vicky Vega-Cabigting, who was also present during the event.

Lazatin, in his message during the flag raising ceremony, highlighted the health workers and frontliners in their role as modern-day heroes in the global fight against Covid-19.

“Just like the victory at Mactan 500 years ago, we too have our own version of modern-day heroes -- our health workers and frontliners who tirelessly do their duties in the service of their fellowmen, while staring in the face of death every day,” he said.

He then urged his fellow Angeleños to do their part in the fight against the virus.

“Let us all bring out the heroes within, by doing our part in this fight against Covid-19. Rest assured that the City Government will be with you every step of the way, as we continue to work together, towards the eradication of the virus, and the recovery of our city,” Lazatin said.

Department of the Interior and Local Government (DILG) City Director Martin Porres Moral echoed the call of Lazatin in strengthening the Covid-19 response in the grassroots level.

“We can all be modern heroes by ensuring enforcement of Covid-19 protocols in their respective barangays,” Moral said, reminding officials in the city’s 33 barangays.

In line with this celebration, Angeles City Tourism Office (Acto) Head Anneleen Antonio-Sugui said that Malacañang has also released Proclamation 1128, declaring April 27, 2021 as a special working day in the country in commemoration of the 500th anniversary of the victory of Lapu-Lapu in the Battle of Mactan, and 2021 as “Year of Filipino Pre-colonial Ancestors.”

“The commemoration of these milestones in our rich history shall strengthen our national pride, and serve as a platform to educate our fellowmen and the whole world of the noble deeds and ideals of our ancestors,” Proclamation 1128 stated.