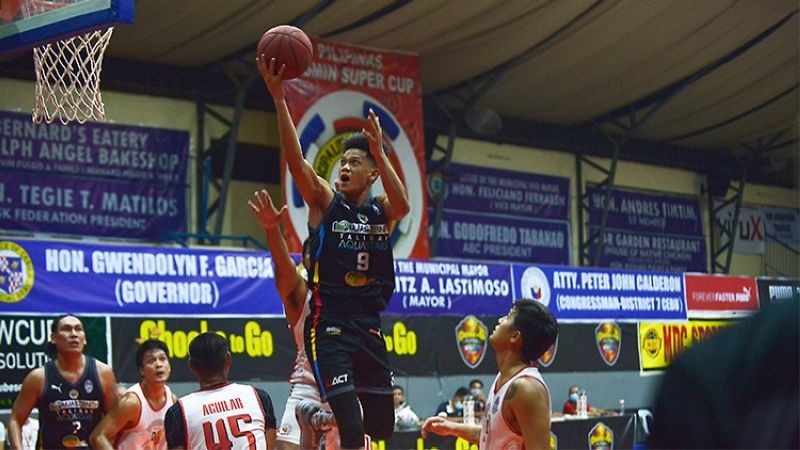 CEBU. MJAS' Jaymar Gimpayan soars to the rack for two against the Dumaguete defense in their VisMin game on Tuesday, April 27, 2021. (Chooks-to-Go)

ALCANTARA -- The MJAS Zenith-Talisay City Aquastars continued on their rampage, trampling over the Dumaguete Warriors, 77-66, to register their ninth win in a row in the Chooks-to-Go Pilipinas VisMin Super Cup on Tuesday night, April 27, at the Alcantara Civic Center in Alcantara, Cebu.

With a semifinals berth already locked in, Talisay City is now looking to complete a clean sweep of the double round-robin elimination round with only the ARQ Builders Lapu-Lapu City standing in their way on Thursday, April 29, at 3 p.m.

With new head coach Leode Garcia at the helm, Dumaguete looked rejuvenated and kept in step with the league-leaders, down by just three, 13-16, after the first period of action. However, Talisay took their game to the next level and unleashed a vicious 18-3 sparked by Egie Boy Mojica, Darrell Menina and Allan Santos that pushed the Aquastars in front by 18, 34-16.

From there, the rout was on as the Aquastars raised their lead to a high of 29 before Dumaguete outscored Talisay, 28-13, in the final frame to make the final score a more respectable one.

Springy forward Jaymar Gimpayan continued his stellar showing in this tournament, piling up a double-double of 14 points, 14 rebounds, three assists, a block and a steal. Big man Jhaymo Eguilos was also productive in limited minutes as he tallied 11 points, seven boards, two assists and two steals.

Ronald Roy led Dumaguete with 17 points spiked by five triples. However, the rest of the team shot poorly from the field, making just 30 percent of their attempts. The Warriors’ vaunted backcourt of Jaybie Mantilla and James Regalado struggled to make their shots, combining to miss 21 of their 26 shots. Mark Doligon was just as terrible, missing 12 of his 15 attempts.