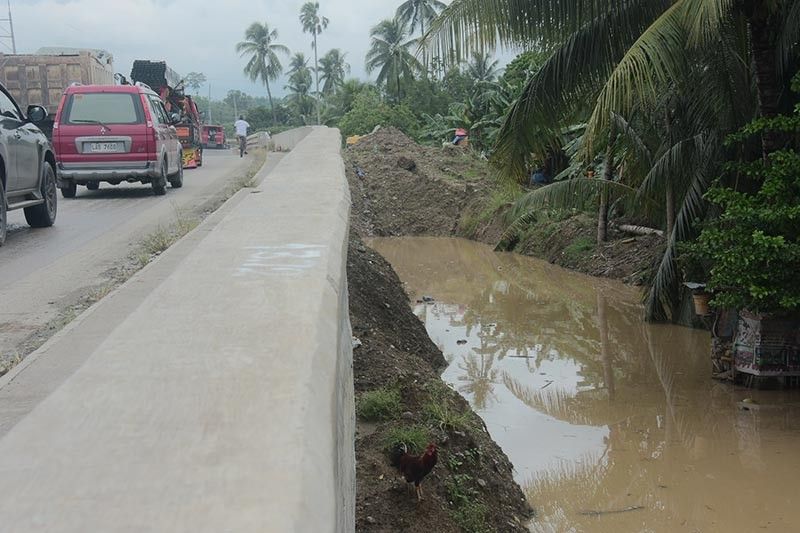 RESIDENTS in some puroks in Bunawan, Davao City experienced a knee-deep flood a day after the heavy downpour on Monday night, April 26, allegedly due to a blocked waterway.

A SunStar Davao Facebook live showed that the flood-level in Purok 4, Bunawan is still knee-deep as of 12 noon Tuesday, April 27.

One resident said the flash flood started around 3 a.m. due to heavy downpour.

The heavy rain stopped in the morning, but the flood has not yet subsided.

While she said they had experienced flooding in the past, the resident said it is the first time they encountered a knee-high.

Some residents blamed the piled up soil that clogged the waterways below the Bunawan Bridge for the flooding and the floodwater to have barely subsided.

"Unsaon pag-agi sa tubig nga gitambak man og yuta ang agianan niini (How can the water pass through when it is clogged?" the resident said in the live interview.

She hopes the City Government and the barangay will take action in removing it as it has been there for almost four months.

The residents said the piled soil was from the city's road widening project.

Ancajas urged the resident to raise their concern through CDRRMO's Facebook page, or through their email address.

"So we can address the problem, and refer it to the rightful agency," he said.

Based on CDDRMO's weather advisory as of Tuesday, 2:23 a.m., intermittent moderate to at times heavy rain showers were experienced in some portions of Talomo, Buhangin, and Bunawan Districts caused by localized thunderstorms. Some parts of the city were reported to have experienced flash floods.

As of Tuesday afternoon, April 27, the water levels in the mentioned areas are now stable, Ancajas said.

Ancajas said their office conducted pre-emptive evacuation in some areas in the city that experienced rising water levels. Some residents are still in the evacuation centers, while others went home after the water subsided.

CDRRMO reported that 700 residents were affected by the recent flood incident.

According to the Philippine Atmospheric, Geophysical and Astronomical Services Administration's (Pagasa) weather advisory as of 2:50 p.m. Tuesday, some parts of the city will be experiencing light to moderate to at times heavy rain showers with possible lightning and strong winds due to thunderstorms

Pagasa advised the public to take precautionary measures against the impact associated with these hazards which include flash floods and landslides.

According to the City Engineer's Office (CEO), uncollected and improperly dumped garbage that clogged the drainage system and canals, siltation, and structures built above waterways have contributed to severe flooding in the city.

CEO head Joseph Dominic Felizarta said they will be checking the outfalls (drainage) whether they are already silted, including the newly constructed drainage such as in Matina Crossing.

There are ongoing projects funded by the City Government and Department of Public Works and Highways, and pumping stations that operate to help ease the flooding.

SunStar Davao reached out to Felizarta for comment on the situation in Bunawan, but he has not yet responded as of press time Tuesday, April 27.