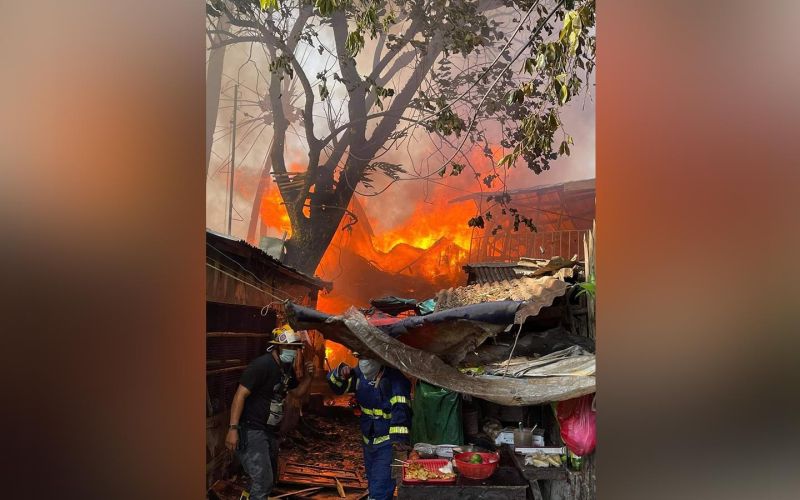 THE Bureau of Fire Protection (BFP)-Bacolod is eyeing faulty electrical wiring as the possible cause of fire that hit 55 houses in Purok Neptune, Barangay Singcang-Airport, Bacolod City on Monday afternoon, April 26.

City Fire Marshal Chief Inspector Rodel Legaspi said Tuesday, April 27, that the fire started from the two-story house of a certain Teresa Pestano, 65, around 4:18 p.m. It started on the second floor of the house made of concrete and light materials.

He said Pestano was at the ground floor of their house and she panicked when she saw the fire on the second floor.

The fire immediately spread to other houses that were made of light materials.

The fire destroyed 47 houses and eight others were damaged.

Legaspi said the fire reached the third alarm status and all the BFP's fire trucks were dispatched to the area, including the fire volunteer trucks.

He said they had difficulty penetrating the area because of the narrow passageways and they need to pull and connect the water hose to reach the affected area.

Due to strong winds, he said the fire immediately spread to other houses, including the make-shift structures across the creek.

Legaspi reminded the public not to leave any lighted candle or lamp unattended, and to always check the electrical connection before leaving the house, or immediately unplug an appliance if it smokes or has an unusual smell, and have it repaired.

Mayor Evelio Leonardia also ordered the Department of Social Services and Development and the Disaster Risk Reduction and Management Office to provide swift response to the affected families.