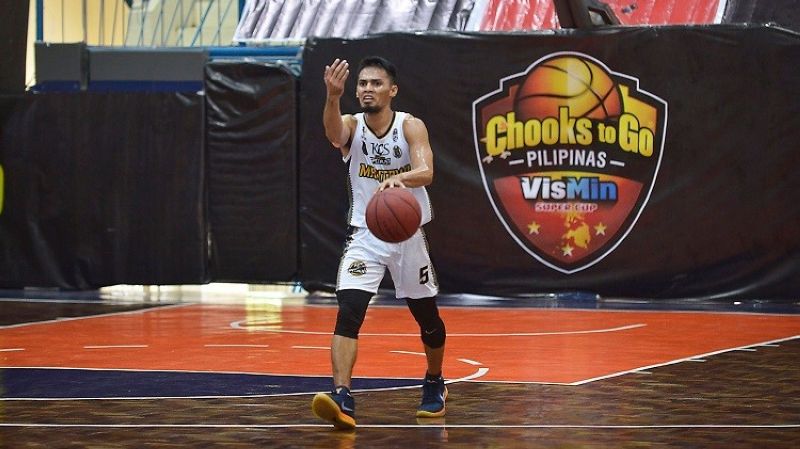 CEBU. KCS' Gileant Delator commands his troops during their game versus Tabogon on Wednesday, April 28, 2021, in the VisMin Cup. (Chooks-to-Go)

ALCANTARA — The KCS Computer Specialist-Mandaue City put on a shooting display in the second period, draining six straight triples, to take complete control of the game and trounce the Tabogon Voyagers, 82-71, in the Chooks-to-Go Pilipinas VisMin Super Cup on Wednesday afternoon at the Alcantara Civic Center in Alcantara, Cebu.

The win was KCS’ second in a row, and seventh in nine games, as they cruise towards the semifinal round with the second seed already in their back pocket.

Down 23-25 early in the second, KCS quickly went on a three-point shooting spree, making six in a row in a scorching 26-2 scoring tear that vaulted them in front, 49-29, at halftime.

Steve Castro came off the bench and gave Mandaue a lift with two triples while Gryann Mendoza, Gileant Delator and Phil Mercader accounted for four in that game-changing rally.

“Its about time that Steve Castro gets his breakout game kay since the start sa league, siya ang pinaka consistent and giving quality minutes for the team,” said KCS assistant coach Jabby Bautista.

In all, KCS made 10 three-pointers in the first half.

KCS led by as much as 29, 61-32, but Tabogon fought their way back in the fourth and trimmed the deficit to just seven, 62-69, after a three-point play by Richmond Bersabal. However, KCS was unfazed and responded with buckets from Mendoza, Castro and Delator to bring their lead back to 13, 75-62, with just 3:03 left in the match.

Tabogon lost for the third straight time and dropped to 3-6 with just one more game left in the double round-robin elimination round. Arvie Bringas paced Tabogon with 19 points and nine rebounds.