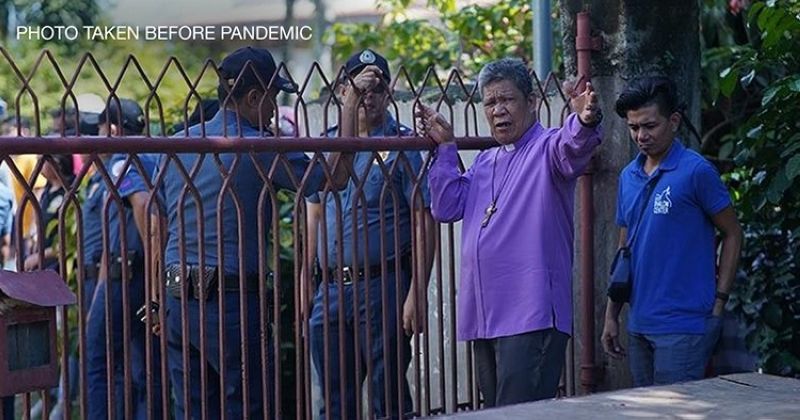 THE Davao Regional Trial Court (RTC) issued a warrant of arrest against six United Church of Christ in the Philippines (UCCP) Haran-Davao administrators for child abuse.

The six accused have been charged with two counts of violation of Republic Act 7610 or the Special Protection of Children Against Child Abuse, Exploitation, and Discrimination Act or the Anti-Child Abuse Law.

The warrant was issued by Presiding Judge Dante Baguio.

In a statement on its Facebook page on Wednesday, April 27, UCCP said that personnel from the Philippine National Police went to Haran and Brokenshire College to look for Tequis and ask for his whereabouts.

“Bishop Tequis is being harassed due to his genuine passion of serving the poor and needy, especially the Lumads,” UCCP said.

The Davao City Police Office, in a press conference on Wednesday morning, April 28, declined to comment on the recent issuance of the warrant.

The issuance of the warrant comes nearly a month since the Anti-Money Laundering Council issued a freeze order on the bank deposits and assets of UCCP after it was allegedly used to finance or support terrorism.

In a Philippine News Agency report, AMLC issued Resolution TF-36 dated March 12, 2021. The AMLC order covers the three bank accounts of the UCCP Haran Center with the Philippine National Bank amounting to more or less P600,000, and a real property under the name of Brokenshire Integrated Health Ministries Inc.

The freeze order stemmed from the AMLC’s investigation that the assets are used to finance terrorism in violation of Republic Act 10168, otherwise known as The Terrorism Financing Prevention and Suppression Act.

However, as of Wednesday, the resolution has not yet been posted on AMLC’s website.

It has been previously reported that local authorities have claimed that the IPs are allegedly being exploited and enticed to join anti-government protest actions, brain-washed to hate the government, and soon to become members of the communist New People’s Army (NPA).

According to government security officials, in the guise of formal education, the IPs, including minors, are indoctrinated with a series of communist ideologies, principles, and beliefs into being “Red warriors” by Communist Party of the Philippines (CPP) members posing as teachers in the so-called learning institution.

In mid-September of 2020, four members of an IP group from Davao del Norte pressed charges before the City Prosecutor's Office against NPA leaders and administrators and board of directors of the UCCP Haran Center.

The four IP complainants, who are members of the Ata-Manobo tribe and were minors "during the time of the commission of the crimes," accused Haran officials of "harboring communist terrorist group (CTG)" and forcing them against their will.

Davao del Norte Governor Edwin Jubahib said the IPs inside the facility are being exploited by the communist rebel movement for "various terroristic activities."

Juhabib recently said the Provincial Government is planning to "rescue" all remaining IP families inside Haran this year. He said there are 125 families housed in Haran but 30 of them have already returned to their communities, while 95 are awaiting rescue.

The Regional Peace and Order Council of Region Davao (RPOC-Davao) on January 15, 2020, approved a resolution seeking the immediate closure of the UCCP Haran Center.

The UCCP Haran Center was also allegedly implicated in the case of kidnapping with serious illegal detention, trafficking in persons, and child abuse after the successful rescue operation of 19 IP minors inside the University of San Carlos Campus, Retreat House, Talamban, Cebu City on February 15, 2021.

One of the witnesses of the case claimed most of the rescued minors are from Talaingod, Davao del Norte who were initially housed at the UCCP Haran Center, Davao City. (With reports from PNA)