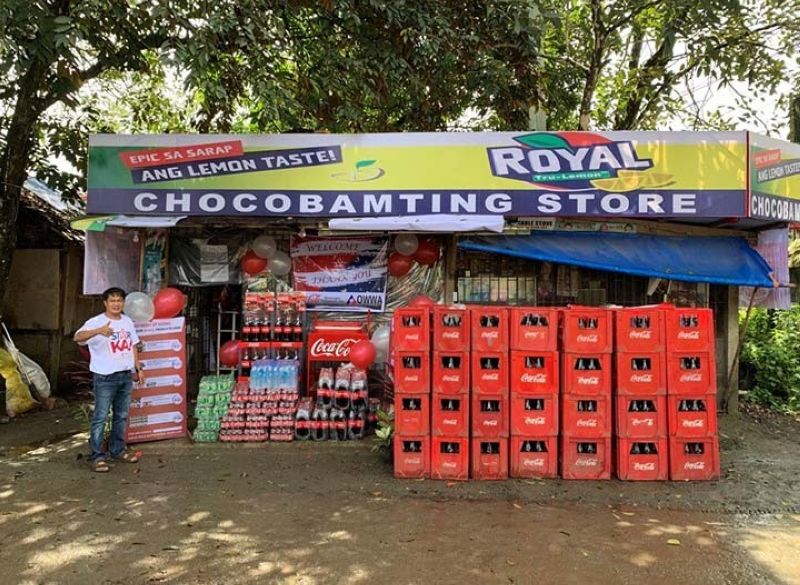 Now a businessman thanks to the “Balik Pinas” Program, Glenn Dela Cerna gives a big thumbs up to celebrate the success of his store in Brgy. Quezon, Surigao City. Glenn returned home to the Philippines after working for 15 years in Abu Dhabi. He was recognized by Dole-Owwa during its Balik Bayani Awards 2020. 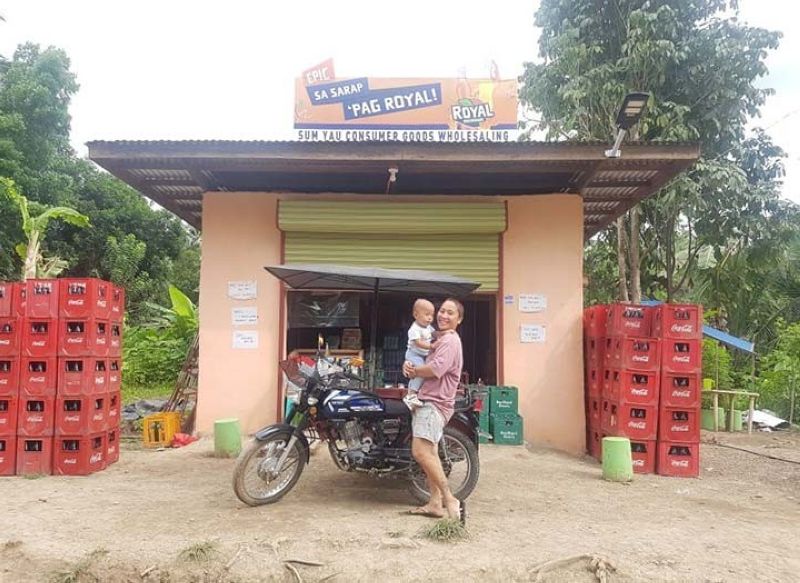 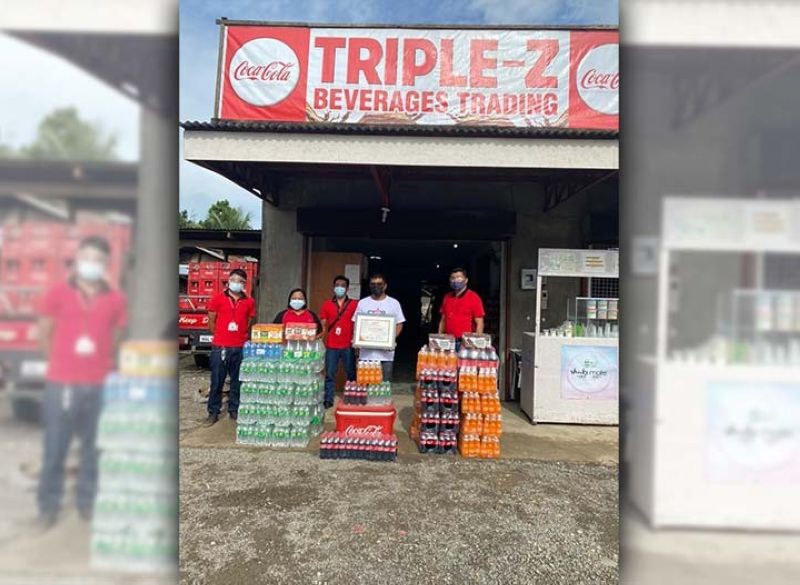 “Balik Pinas” pioneer Jo Mari Baira with Coca-Cola representatives led by region sales manager Wendell Dayrit, in front of his store in the Municipality of Columbio, Sultan Kudarat. Joms was one of the recipients of Owwas’s Balik Bayani Award 2020.

COCA-COLA Beverages Philippines Inc. (CCBPI), the bottling arm of Coca-Cola in the country, has committed to helping overseas Filipino workers (OFWs) via its “Balik Pinas” program—an initiative that provides repatriated OFWs due to Covid-19 with opportunities to start their own businesses.

Since the program’s expansion in 2020 as a direct response to the pandemic-wrought job crisis, the CCBPI has received over 400 inquiries and has thus far assisted over 40 OFWs in becoming business owners who are now part of the Coca-Cola family as distributors or wholesalers.

“By providing livelihood opportunities, especially to those who suddenly found themselves without stable incomes and unable to provide for their families, Coca-Cola is staying true to its pledge to help revive the Philippine economy via job generation and to support Filipinos confronting adversities,” says Gareth McGeown, chief executive officer and president of CCBPI.

CCBPI assists former OFWs in choosing a suitable business model for their area, helps in managing their cash flow and inventory and sees to it that they are given proper guidance and training until they are prepared and fully equipped to operate on their own—all in all, a sustainable and profitable business founded on practical support from a global beverage brand.

The company’s goal to assist Filipinos, and consequently revitalize the economy at such a critical time, has been steadily expanding in reach to transform more lives. Further illustrating the program’s success by bringing Coca-Cola to more communities, here are “Balik Pinas” Program pioneers who have just rewritten the trajectories of their life stories with their inspiring journeys—Melody Carillo, Jo Mari Biara and Glenn Dela Cerna.

Selfless motherhood rising above a reversal of fortunes

With her nine-month-old baby in tow, Melody Carillo returned to the Philippines from Hong Kong, following a series of devastations ranging from personal heartache to professional disappointment. She and her then-newborn were abandoned by the child’s father—and then the pandemic collided against the renewal of her contract as a domestic helper and nanny when her employers had to cut costs after losing their own jobs.

Melody’s story was marked by a reversal of fortunes, but she overcame her challenges with her perseverance and her strong will. Upon her unplanned homecoming in September 2020, Melody bravely confronted the need to support her small family. Her original plan to start her own business—the reason she left for Hong Kong in the first place—found footing in her hometown of Brgy. Kalaisan, Kidapawan.

Melody learned of Coca-Cola’s “Balik Pinas” program through sales associate Ariel Pocot, and the two discussed how the program could help her achieve her dream of becoming a business owner. At the tail-end of February 2021, Sum Yau Consumer Goods Wholesaling—named after Melody’s daughter—was successfully launched. In just under a month of operations, Sum Yau has bought and sold around 4,200 cases of Coca-Cola beverages.

Melody shares that she is “so happy and blessed” for having been given an opportunity to pursue a livelihood, no matter the personal obstacles she had to face. She credits the Coca-Cola South Davao Sales Team for guiding her through every step of the process, from the initial orientation to her first order and delivery, from establishing a servicing schedule to training her how to sell.

Jo Mari Baira had been working in Saudi Arabia for nearly seven years as a payroll officer. He considers himself a passionate individual, with a big heart that was increasingly insisting on a life of service for his country. That is why Joms took the chance to return home to reunite with his family in Columbio, Sultan Kudarat and serve his local community.

A different opportunity for service, however, presented itself to Jo Mari upon his return to the Philippines through a friend who convinced him to team up with his sister to start a small business venture. According to Joms, thanks to Coca-Cola’s never-ending support, the business they started since returning home from Saudi has been fruitful since its first day of operations.

“Coca-Cola has never left us behind, communication lines were open every day and they were consistent with their emails and with checking up on us. We’re happy that the relationship is not just based on selling; they are always present to assist us,” shared Joms.

He takes pride in the growth of their small business via the “Balik Pinas” program—an avenue to provide for his family and an opportunity to serve his community. He shares that he plans to expand his small business as a distributor and dealer, involve and engage the rest of the community and serve as an inspiration to fellow OFWs.

Family at the heart of the business

Another “Balik Pinas” program pioneer, Glenn Del Cerna spent almost 15 years as a construction worker and electrical foreman in Abu Dhabi to provide for the needs and the welfare of his family back home in Surigao City. The pandemic, however, had him returning home and worrying about the cost of his children’s education given the loss of his long-standing livelihood.

A small business, one he can attend to in the immediate orbit of his family, was the route he took—and Glenn emerged as a businessman and wholesaler with the help of “Balik Pinas.” Glenn describes how helpful Coke has been, supporting him throughout the challenges of launching a business—which, in his case, involves servicing a more remote area.

“Within 24 hours of starting, we received the delivery of around 30 to 40 cases of Coke products. They also sent over a cooler, stands and containers for products.

Glenn and his family take pride in their business, particularly in building it from the ground up. Driven by his immense love for family and his determination to reach a more comfortable future, he shares that he would like to stay in the Philippines and further grow his business.

Coca-Cola standing in solidarity with Filipinos

The common thread winding their way through the stories of “Balik Pinas” pioneers is the drive to secure a better tomorrow for their family. This reflects Coca-Cola’s main goal for the program—to provide opportunities to Filipinos, especially those who have been severely affected by these challenging times, and help restart the local economy by providing individuals the possibility of starting their own livelihood.

According to the Department of Labor and Employment (Dole), over 400,000 OFWs have been repatriated since January 2021. With the help of Dole and local government units, Coca-Cola aims to reach more OFWs who are interested in starting their own business through “Balik Pinas.”

For referrals and more details, one can contact the Coca-Cola contact center at (02)-8813-Coke (2653). One can spread the word to be one with the company in helping “kababayan.” SPONSORED CONTENT