EXPLAINER: 7 takeaways from Bong Go apology on Lapu-Lapu speech, topped by 1. how story 'came off wrong,' 2. Duterte did it too. 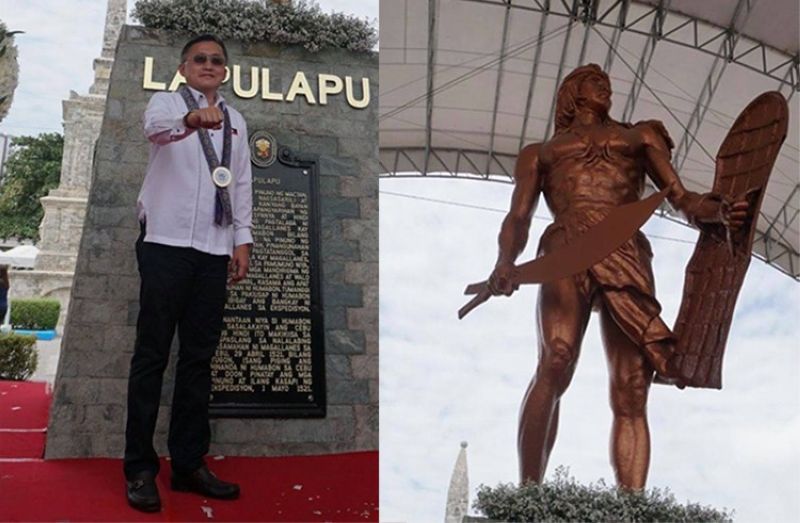 THE senator said in his speech at the Kadaugan sa Maktan celebration last Tuesday, April 27, in Lapu-Lapu City that Lapu-Lapu was a Tausug from Mindanao who was sent by the Sultanate of Sulu to the Cebu island.

That drew flak on social media, with such comments as "outright wrong," "fiction" and "an insult" to Cebu and Cebuanos. History's accounts say Lapu-Lapu led the native warriors who killed in the battle the Portuguese explorer Ferdinand Magellan. Wednesday night, April 28, the senator posted an apology on Facebook.

[1] NO ADMISSION. The apology does not categorically admit the error about the piece of history and in raising it at the celebration, which could embarrass and anger, and did incite bad and ugly reaction from, Cebu and a number of Cebuanos.

The apology is not a clear acknowledgment of the wrong. It is qualified: "kong iba ang dating." The translations of Tagalog into English were "if my story came off wrong" and "if it did not come across right." The "if" makes a difference. The apology says the story could be wrong.

No mention about having slighted the host, the Lapu-Lapu City organizers who invited him to Lapu-Lapu Day and, by extension, the people of Cebu.

[2] SOURCES AS DEFENSE. The senator turned to the sources of his "story" for defense: One Abraham Ibarani-Idjirani, identified as a spokesman and/or secretary general of the defunct Sultanate of Sulu. The other is President Rodrigo Duterte, who, Go said, mentioned it several times. Both Ibarani-Idjirani and the President are not full-time historians or, to be sure, not experts on Lapu-Lapu and the Battle of Mactan. Some critics see the senator seeking refuge behind the high trust rating of the President. Or just citing the leader of the land as also having done what Go did.

Pigafetta, chronicler of the Magellan-led expedition, was the "only primary source" that the country's historians have been relying as basis for the information about the Mactan chieftain. Versions of the Lapu-Lapu story other than Pigaffeta's have been tagged fiction and myth, under which Go's tale must fall.

[3] 'VACCUUM' IN HISTORY. The National Historical Commission of the Philippines (NHCP), Go says, attested there is "no clear historical record" that can prove the true origin of Lapu-Lapu and the versions of his life story are considered part of tradition and culture. Cebu anthropologist and historian Jose Eleazar Bersales also cited the gap in Lapu-Lapu's genealogy.

That "vacuum" of history the senator apparently also uses for his defense. There is no evidence that Go was right -- or was wrong.

Critics however say the senator offered an unsupported theory during, no less, the quincentennial celebration of Christianity, of which Lapu-Lapu figures prominently in the part of history being commemorated. Bersales warned of it in a 2019 column but it must have eluded Go's research staff.

[4] INDISPUTABLE CLICHES. The senator uses a number of principles he says he affirms in, clichés mainly but hardly disputable, such as:

-- "I have full respect for our history and I have no intention of changing the way we admire and believe in the lives of our heroes."

-- "I will continue giving importance to the bravery of the Filipinos' ancestors in all chapters of history and the remarks I made would not change my respect and love for my fellow Visayans."

-- "I am ready to listen and learn based on the knowledge from experts in the field of history."

-- "We can all be heroes in this time of the pandemic by helping, caring and serving -- not by criticizing and finding fault with our fellow Filipinos... Let us take to heart the lessons of history that remain relevant in our lives today."

[5] NO SPECIFIC PRAISE FOR LAPU-LAPU. The apology does not particularly laud the Mactan warrior. Lapu-Lapu's bravery is lumped with that of "Filipinos' ancestors." Understandably, the senator does not wish to tread there. He must not wish to be seen as making up for his remarks that he does not see as substantially wrong or to set off another cause of controversy.

[6] DOESN'T BLAME GHOSTWRITING, RESEARCH. Although the people who prepared the senator's speech, including the writer and researchers, were also blamed in social media for the fiasco, Go does not mention it in his apology.

For good reasons: The speaker rarely exposes the ghost and admits that the words in his speech were not his. Even if he does, he is deemed to have owned up the speech the moment he delivers it. Besides, the apology most likely was written by the same staffers who did the speech; they wouldn't flog themselves in public.

[7] NO LOCAL OFFICIAL CALLS OUT GO. Media influencer and former mainstream journalist Max Limpag has been prodding local officials, especially the Lapu-Lapu City politicians who invited Go, to come to Lapu-Lapu's defense or, at least, correct the historical error. Those who heeded Limpag's teasers, raise a hand.

LGU heads must think they cannot call out the mistake without offending the senator, who is considered the man closest to the President. Even the local official who is generally considered the most outspoken of them all dodged the question at a press-con and is still to be heard from.

Newspaper columnist and PR specialist Anol Mongaya calls it "power dynamics." The politicians regard it as abundance of caution.