Showcasing his art on social media 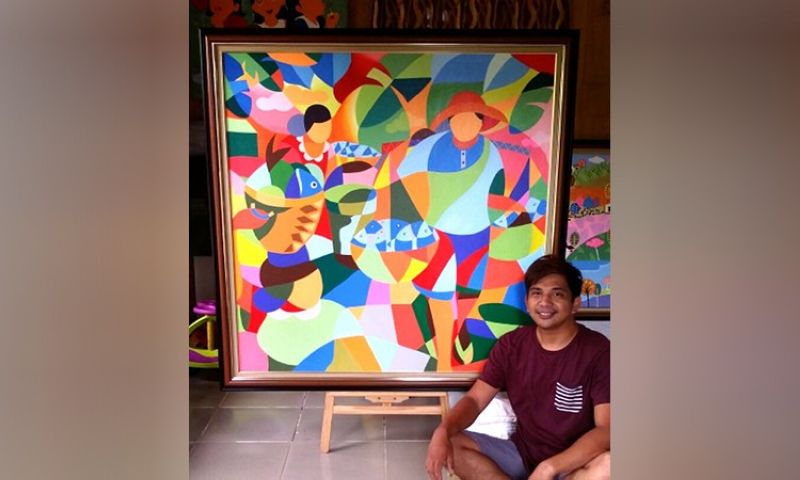 FOR some, the strictest community quarantine status, enhanced community quarantine (ECQ), was when they struggled the most during this time of pandemic, when all the movements were tightly restricted. But Rene B. Milan, a 34-year-old freelance visual artist from Tagum City, it was the best time for him to find the right medium to highlight his works of art and uplift his and his family's life economically.

When all the people were strongly advised to stay at their homes, Milan grabbed the opportunity to use Facebook to showcase his talent in painting.

"Dako ug tabang ang social media specifically ang Facebook labi na kay lockdown to, ECQ wala kaayo ginabuhat ang mga tao kundi ang pagpundo lang sa balay pobre man o dato (Social media, specifically Facebook, was a big help for me during lockdown, when most of the people, rich or poor, had nothing to do but stay at their homes)," he said.

He said for an unknown artist like him, who also has no formal training or education in arts, the social media was his sole strong supporter so that his paintings could grab the interest and attention of the people, especially those who can afford to buy not just their needs but also works of art.

He, however, lamented the struggle of nameless artists like him during the ECQ saying that, "At first lisod jud (it was very hard), especially during the first and second quarter of 2020 labi na kay walay gyuy nakaila sa ako aside sa mga ginagmay nga nagpa-commission sa akua previously (especially that nobody knows me aside from those who commissioned my artworks at a small price),” Milan said.

However, he did not lose hope and instead used those times as a period of preparations to mount his exhibit on social media.

He was just glad that there are FB pages that helped him greatly to expand the platform in showcasing his arts to a larger number of netizens and art aficionados, such as the Davao Barter Comunity FB group, which was introduced to him by a friend.

At present, his paintings have provided him and his family a little bit more than what they needed. He was able to buy a car and his dream motorcycle and a house.

But he said challenges, not only for painters like him, are always there, pandemic or not.

"Kanang mahutdan ka ug commission/customer, it means man gud wala puy possible income nga magpasok, mao gyud na ang usual challenges para nako. When time(s) like this isa lang gyud ka saying akuang ginasaligan, (If you run out of commission/customer, it means there's no income, that's the usual challenge I face. But when that happens, there's only one saying that I follow), 'Do not focus on the problem, focus on the solution,'" Milan shared.

He also advised newbie artists that no matter how and what they are struggling from, different people have different periods of achieving their dreams. Some reach their dreams early, while others later.

"Art is not a race, art is a blessing to share, to give joy and to give inspiration to others," Milan said.

He added that artists should also be open to comments and review of their artworks.

"Natural lang na siya for us to grow and aim for better output," he said.

Milan also does not forget to thank his mother who he made his inspiration in all his works of art and his wife, Junerhea, and their three-year-old daughter, aside from some individuals who have supported him and given him strength to continue to do what he does best.