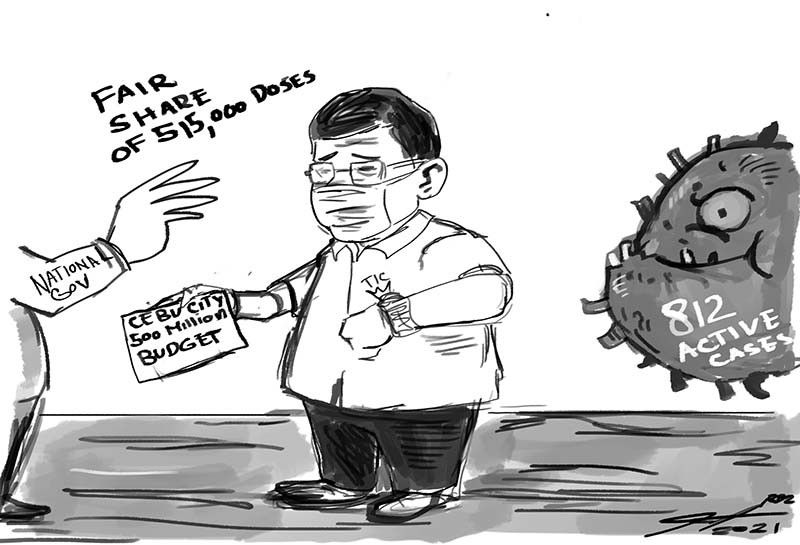 For the second time this week, Cebu City Mayor Edgardo Labella sought an update on the next shipment of vaccines against the coronavirus disease 2019 (Covid-19) from the national government.

The City Government was forced to halt the inoculation of senior citizens on Friday, April 23, 2021, after it ran out of vaccines.

On Monday, April 26, Labella asked vaccine czar Carlito Galvez Jr. if the latter would allow Cebu City to purchase vaccines, using the P500 million budget it had set aside for the purpose.

The mayor’s request was turned down. Instead, he was assured that the national government would continue to distribute the vaccines for free to local government units nationwide and that Cebu City would receive the next shipment before the end of the month.

On Thursday, April 29, Labella again asked about the status of the vaccines, saying he wanted Cebu City to receive its “fair share” of the 515,000 doses that recently arrived in the country, which included 15,000 doses of the Russian Sputnik V vaccine.

Has the City been shortchanged since the national government began its vaccine rollout?

The number of Covid-19 cases in Cebu City has been dropping over the past few weeks compared to the numbers in the National Capital Region and its neighboring provinces, which continue to remain relatively high, albeit they have a much larger overall population. That should explain why they, and not Cebu City, received the bulk of the previous vaccine allocations.

Or does the mayor believe Cebu City deserves a bigger allocation because it is the “Queen City” of the south?

Labella is fully aware that the national government has no control over the supply of Covid vaccines. The Philippines has had to make do with what has arrived so far. The initial batches were composed of Sinovac vaccines donated by the Chinese government and AstraZeneca vaccines that came from the Covax Facility, the international partnership established to ensure equitable distribution of coronavirus vaccines worldwide.

The half million Sinovac doses that arrived on Thursday were purchased by the Philippine government, but Galvez said the vaccines would be distributed immediately “in areas that are experiencing high cases of Covid-19.”

Cebu City with its 812 active cases may not qualify and may have to wait a little longer.

The mayor will just have to heed his own advice to his fellow senior citizens who are eager to receive the first dose of the two-dose vaccine. Be patient.

Although the City fell flat on its face with its vaccination program, he or his administration is not to blame. The vaccines will arrive when they arrive.