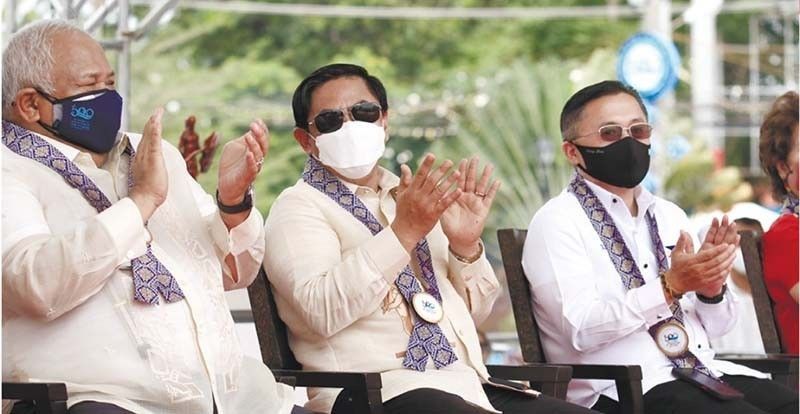 CEBU. Senator Bong Go (right), seen here with Lapu-Lapu City Mayor Junard Chan (middle) and Executive Secretary Salvador Medialdea during the celebration of the 500th anniversary of local chieftain Lapulapu’s victory over Ferdinand Magellan in the Battle of Mactan on Tuesday, April 27, 2021, drew flak when he claimed Lapulapu was a Tausug from Mindanao during his speech at the event. (Alan Tangcawan)

DESPITE the controversy it attracted, the speech of Sen. Christopher Lawrence “Bong” Go during the 500th year commemoration of the Battle of Mactan on Tuesday, April 27, 2021, somehow became a “blessing in disguise,” said Cebuano archaeologist and historian Jose Eleazar “Jobers” Bersales.

Bersales told SunStar Cebu that while Go’s claims on Lapulapu’s origins were controversial, it helped increase the public’s interest in the country’s first Filipino hero and Cebu’s ancient history.

Bersales also sees Go’s apology to the Cebuanos on the controversy as “sincere.” “Personally, I hold no rancor or ill will against him for his mistake. He has owned up to it, has apologized and is willing to learn more,” Bersales said.

Earlier, Bersales had said that Go’s story of Lapulapu was a “laughable speculation.”

In his speech last April 27, Go quoted Abrahan Ibarani-Idjirani’s study on Philippine history that Lapulapu was a Tausug warrior who was ordered to monitor some islands where foreigners were seen.

This drew the ire of some Cebuanos.

On Thursday, April 29, 2021, Go issued an apology to Cebuanos for sharing a version of Lapulapu’s story which deviated from the popular narrative based on the account of Italian chronicler Antonio Pigafetta that Lapulapu was one of the chiefs of Mactan. (WBS)