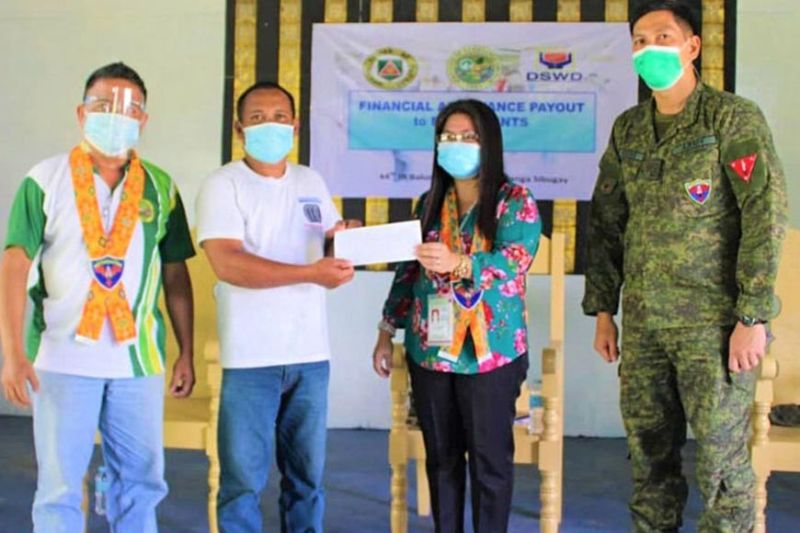 ZAMBOANGA. The government, through the Department of Social Welfare and Development (DSWD), releases Friday the second batch of financial assistance amounting to P170,000 to 34 former New People’s Army (NPA) rebels in Zamboanga Sibugay province. Each receives P5,000 financial aid. A photo handout shows a former member of the NPA (2nd from left) receiving his check from a DSWD staff member. (SunStar Zamboanga)

THE government, through the Department of Social Welfare and Development (DSWD) has released the second batch of financial assistance to 34 former New People’s Army (NPA) rebels in the province of Zamboanga Sibugay.

The financial assistance amounting to P170,000 was released to recipients Friday at the headquarters of the Army’s 44th Infantry Battalion (IB) in Imelda, Zamboanga Sibugay province.

Junila Regañon of the Zamboanga Sibugay Provincial Social Welfare and Development Office, who led the distribution of financial assistance, said each of the recipients received P5,000.

The distribution of financial assistance was held in partnership with the Provincial Task Force to End Local Communist Armed Conflict (PTF-Elcac) and 44IB.

Lieutenant Colonel Filven Noche, 44IB commander, said the financial assistance is to support the daily needs of the former NPA rebels “as they are reintegrated into the mainstream society during this time of Covid-19 (coronavirus disease 2019) pandemic."

Noche vowed to continue the support to the local government units in implementing Provincial Task Force to End Local Communist Armed Conflict programs to the people of Zamboanga Sibugay province.