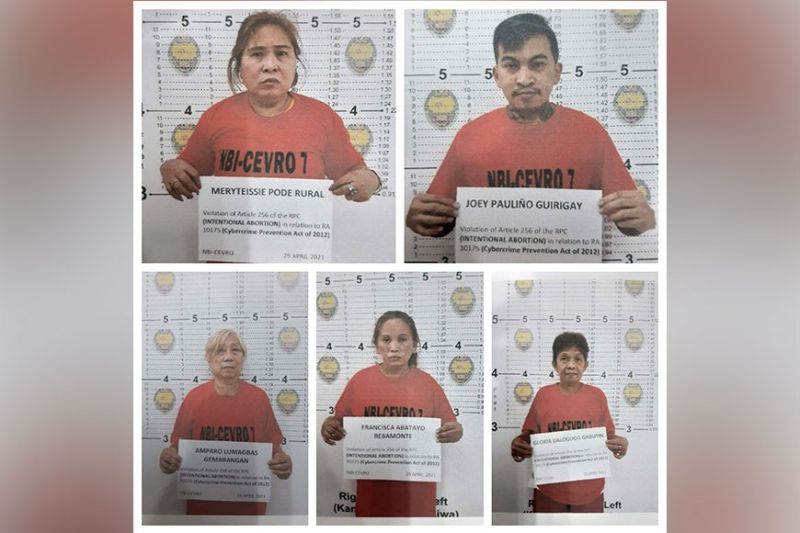 FIVE persons who allegedly claimed to be legitimate abortionists were caught in separate operations by the National Bureau of Investigation (NBI)-Central Visayas on April 29, 2021.

The NBI-Central Visayas presented them to the media on Monday, May 3, 2021.

Investigation showed Guirigay had allegedly set up a fake social media account to communicate with pregnant women who wanted an abortion, which is a crime under Philippine laws.

Clients were allegedly guided by Rebamonte, who offered them two packages for the abortion -- first, the cheaper option, which was to buy an “abortive” medicine worth P9,500 from Gabutin; second, the expensive option, which was to undergo abortion at the “abortion clinic” in Talisay City run by Gemarangan and Rural, her assistant, for P30,000.

The NBI agents first caught Gemarangan and Rebamonte in Talisay City, followed by Gabutin and Rural in Labangon, and lastly, Guirigay along V. Rama Ave. in Cebu City.

A tip led to the arrest of the suspects.

NBI-Central Visayas Director Rennan Augustus Oliva said they got an information that Gabutin started her abortion business in 2011.

Oliva, a lawyer, said the person who performs the abortion and the woman who seeks abortion are both criminally liable.

During the entrapment of the suspects, the NBI agents seized speculum, suction syringe, rubber mat and plastic basin.

The suspects denied the allegations against them, but they refused to elaborate. They will be facing charges for intentional abortion, a violation of Article 255 of the Revised Penal Code, in relation to Republic Act 10175, or Cybercrime Prevention Act of 2012. (ANV)