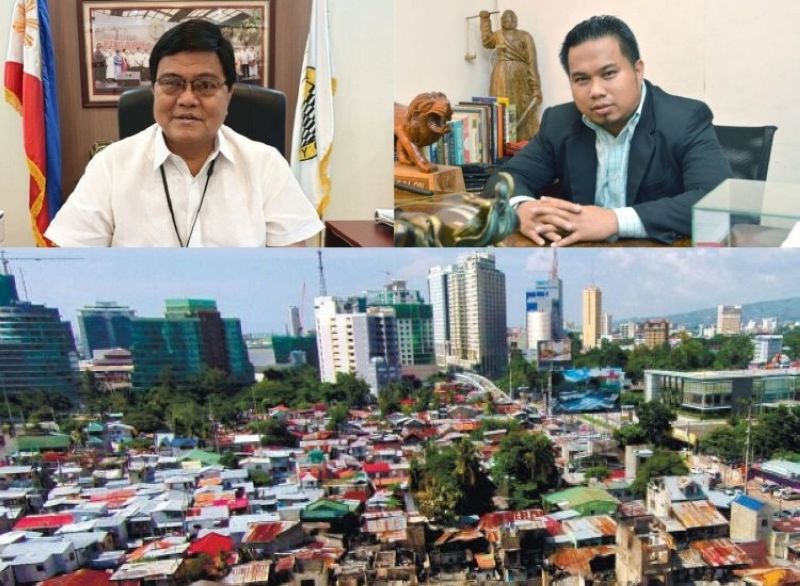 AT A GLANCE. [1] The Sanggunian, in a special session Monday, May 3, voted to request the mayor, through Cebu City Administrator Floro Casas Jr., and City Attorney Rey Gealon to submit to the City Council their position on the letter of Gov. Gwen Garcia asking for the return of the title to province-owned lots covered by the 2018 land swap forged by the former governor and former city mayor.

[2] A number of councilors wanted the execution of the contract as, they alleged, it was already perfected, “a done deal,” the issue has dragged on for more than two decades, and if any LGU should go to court, it must be the province, not the city.

The view however that litigation will prolong the occupants’ suffering and the Sanggunian must wait for the mayor and the legal office prevailed. The waiting period of two weeks, relayed to representatives of the two departments present at the session, prevailed.

[3] City Administrator Casas’s representative said Mayor Edgardo Labella is “adamant” to pursue the 93-1 contract while City Attorney Gealon’s representative said City Hall lawyers are ready to “execute” the agreement, depending upon the decision of the city mayor and the City Council. Presiding Officer Mike Rama quickly quoted the dictionary meaning of “adamant”: “unshakeable or unyielding,” one “determined to keep his opinion or position.”

WHERE TWO LGUs ARE. The Provincial Government -- through Provincial Board resolution #1992-20192.1 and a January 18, 2021 letter of the governor to Mayor Labella – calls for a renegotiation of the deal forged by then mayor Tomas Osmena and governor Hilario Davide III: the swap agreement, separately in 2016, and the deeds of donation, jointly in August 2018.

Before Gwen Garcia’s letter, in an October 28, 2019 meeting, Governor Garcia and City Council Majority Floorleader Raymond Garcia, started the renegotiations. A few weeks after that, on November 6, Mayor Labella “assured” residents of the province-owned lots located in 16 barangays they “will benefit from the deal, especially with respect to the payment.” He didn’t disclose the results of the councilor’s talk with the governor.

As of Monday, May 3, the City Council didn’t know yet what has happened to the initial negotiation. Nobody asked Councilor Garcia who moved that the Sanggunian wait for two weeks for the mayor’s and city attorney’s position.

LEGAL QUESTIONS. The issues of law confronting the City Council and the mayor include these:

[1] Capitol, as expressed in the governor’s letter, asks for the return of the OODCTs (owner’s original duplicate of certificate of title) covering all the province-owned lots, even as Capitol presumably will return to City Hall also the documents covering all the city-owned lots.

The Province wants a status quo ante, literally “the state in which before,” or the state of affairs that existed previously while at least one city councilor believes it must only be status quo, or the existing state affairs. A number of councilors want immediate execution of the contract, which has long been delayed.

It is not known when the agreement for a status quo ante was reached reportedly by “representatives of the city and the province.” Governor Gwen made it clear that new negotiations could not proceed without the return of the documents.

[2] Capitol relies on two grounds for the “rescission” of the contract:

(a) Commission on Audit flagged in 2020 the donation as defective as it was not previously approved by COA, but is it a fatal defect or merely an administrative lapse that can be corrected? Councilor Eugenio Gabuya Jr. said it was a transaction between two LGUs for public benefit.

(b) City Hall used Block 27 at the North Reclamation Area as a CCQC (Cebu City Quarantine Center) when it was already supposed to have been ceded to Capitol. Province lawyers call it constructive rescission. One councilor said off-session the city is merely temporarily using it for an emergency purpose and not re-taking ownership.

POLITICS AND BARGAINING. Politically, the city’s reelectionist public officials need the final solution to the 93-1 crisis more urgently than the Capitol politicians in the 2022 race. Most of the 5,000 families occupying the lots affected by the deal are city voters. Only a few are on a 2.5-hectare city-owned Pulpogan, Consolacion land. Besides, the contest in the province will be much less heated than in the city.

Two city councilors talked of “the purest intention” to push the land swap but the need to protect the city voters’ interest is also a huge factor.

Governor Garcia apparently wants to get a “fair exchange” for the barter. What was fair to Tomas Osmena and Junjun Davide is obviously not fair to her. Gwen’s letter referred to a “non-mutuality of lots” one LGU donated to the other. Meaning, the City must match what the Province gives.

Based on need to win an election, the governor has better bargaining power. She can wait until after the elections. The mayor and the Sanggunian members who will run again may not have that option.