Duterte to masses: Wait for food aid at home 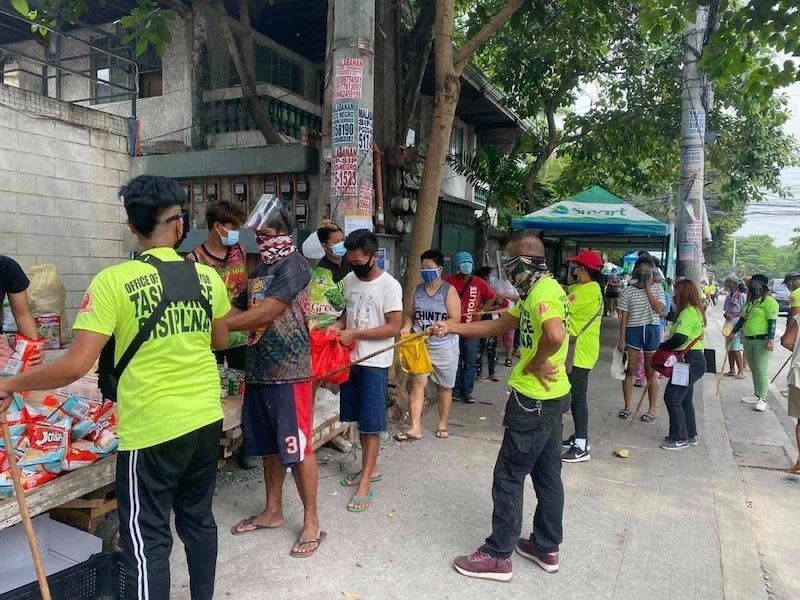 PRESIDENT Rodrigo Duterte discouraged the public from converging in community pantries and urged them to just wait at home for food assistance to be distributed by barangay officials.

In his weekly address on Monday evening, May 3, 2021, Duterte said he had ordered Department of Social Welfare and Development (DSWD) Secretary Rolando Bautista to prepare food packs to be distributed through the barangays during the two-week extension of the modified enhanced community quarantine (MECQ).

He said the barangay health workers may be tapped for the no-contact delivery of the food aid to the poorest of the poor and those who lost their jobs due to the pandemic.

Duterte said the government has been “silently” distributing assistance to the poor.

“Nagdi-distribute kami. It's going on since -- I don't know. Maybe the last -- during the last -- from the last ano natin dito program. Wala 'yan silent lang. Sabi ko, ‘no publicity.’ Pero napipilitan akong i-publicize 'yan dahil I want to stress the point that there could have been a better way of doing things. There has to be some sense in, you know, what we are doing,” he said.

Without naming Ana Patricia Non, the woman who initiated the community pantry movement to alleviate hunger during this pandemic, Duterte said educated people should have known that gatherings would lead to transmission of the virus that causes coronavirus disease 2019 (Covid-19).

Duterte’s comments were made nearly three weeks after Non set up the first community pantry along Maginhawa St. in Quezon City on April 14, 2021, and after his spokesperson Harry Roque Jr. said the community pantries exemplify the bayanihan spirit of the Filipinos.

Non’s initiative has been replicated across the country, with some legislators expressing support and some local government officials assuring no permits are needed. Donations have poured in, even from farmers and fisherfolk.

To address concerns over Covid-19 transmission as hundreds of people wait in line for their turn to receive free food supplies, the Department of the Interior and Local Government (DILG) recently came up with guidelines for community pantries

“People were swarming...So nagkalapit-lapit, nagkalapit-lapit hanggang magtaas nanaman. So we are again forced to enforce a quarantine to limit people from going around and passing the Covid virus to a lot of people. The fact na ginawa ninyo, hindi ninyo alam ang consequences... But it has something to do with just common sense. Hindi ninyo alam 'yan na nagdudumugan 'yong tao. Iyan ang mahirap tapos ang gobyerno ang masama,” Duterte said.

In the same public briefing Monday, DILG Secretary Eduardo Año said nearly 60,000 complaints of alleged anomalies in the distribution of the cash aid under the government’s social amelioration program have been filed.

He said these were being verified and investigated.

The government had set aside P22.9 billion to distribute P1,000 per individual or P4,000 per family as cash assistance for the two-week enhanced community quarantine (ECQ) in Metro Manila and in the provinces of Bulacan, Cavite, Laguna and Rizal.

Of the amount, Año said P17,037,122 has been distributed. Local government units were given until May 15 to distribute the cash aid.

Metro Manila and the four provinces, also known as NCR plus, were reverted to ECQ from March 29 to April 11 due to a sharp increase in Covid-19 cases. The area shifted to modified ECQ on April 12. It will remain under MECQ until May 14, 2021. (Third Anne Peralta-Malonzo / SunStar Philippines)