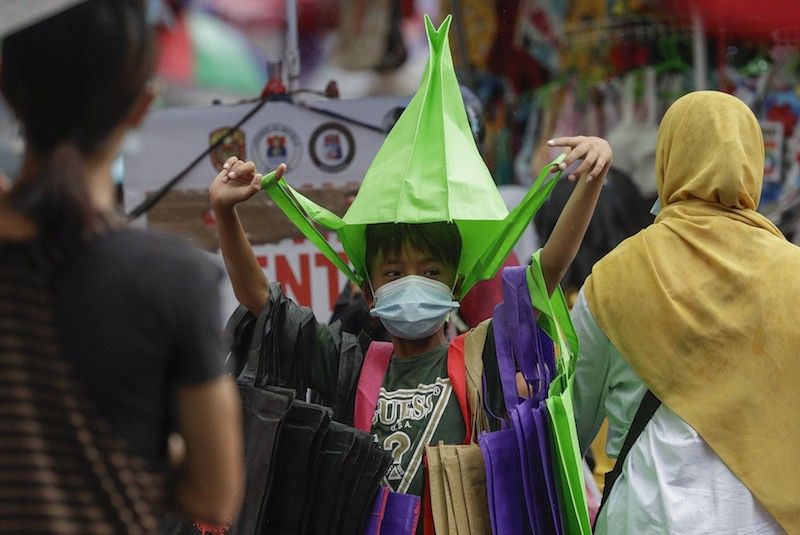 MANILA. In this photo taken in December 2020, a boy wears a face mask as he sells bags in the shopping district of Divisoria in Manila. (File)

(UPDATED) For the first time in about seven weeks, new cases of coronavirus disease 2019 (Covid-19) nationwide fell below 6,000, the Department of Health (DOH) reported Tuesday, May 4, 2021.

The daily positivity rate also declined to below 15 percent for the first time since the 14.9 percent on March 22, 2021.

In its case bulletin Tuesday, DOH reported a low testing output of 35,286 as of May 2, of which 14.3 percent yielded positive results.

With recoveries exceeding new cases, the number of active cases declined to 66,060.

In his report to President Rodrigo Duterte during a televised briefing on Monday evening, May 3, DOH Secretary Francisco Duque III said cases were decreasing even in the National Capital Region (NCR).

The NCR, which has a population of about 13 million, accounts for the largest number of active Covid-19 cases in the country. Other regions with a high number of cases are Calabarzon and Central Luzon.

Duque said the aim is to lower this further to the January to February 2021 level of about 1,700 new cases per day.

He also said the two-week growth rate has dropped to negative 15 percent from 11 percent three to four weeks ago, while the average daily attack rate slowed down to seven per 100,000 population from the previous 9.21 per 100,000.

The NCR and Davao are among 10 regions with a negative two-week growth rate, although NCR continued to have the highest average daily attack rate, he added. NCR’s attack rate was 25 per 100,000 as of May 3, lesser than the previous 34 per 100,000 population attack rate.

On the other hand, Duque said the DOH was monitoring Central Luzon, Bicol, Mimaropa, Northern Mindanao and Zamboanga Peninsula which have posted increases in their two-week growth rates. (Marites Villamor-Ilano / SunStar Philippines)