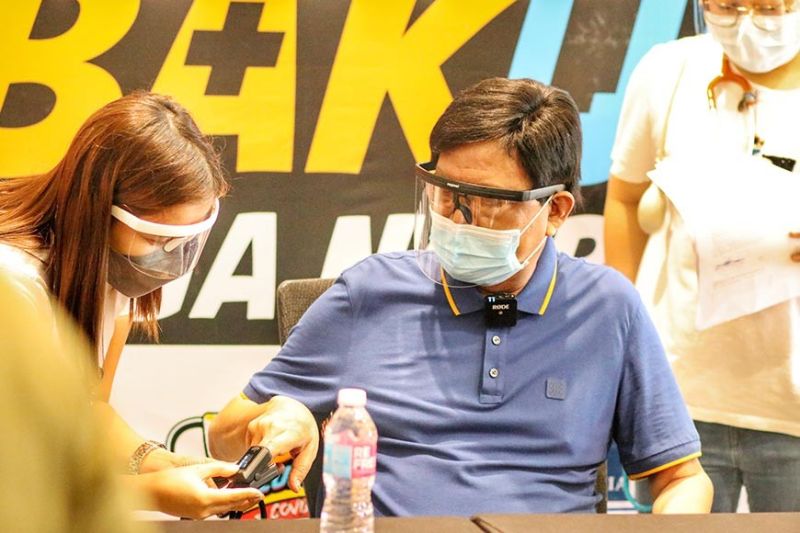 INOCULATED MAYOR. A health worker monitors the vital signs of Cebu City Mayor Edgardo Labella, 69, after his vaccination against Covid-19 at SM Seaside City Cebu on Tuesday, May 4, 2021. / AMPER CAMPAÑA

EIGHTEEN days before he turns 70, Cebu City Mayor Edgardo Labella had himself inoculated with CoronaVac, the vaccine made by Chinese firm Sinovac Biotech, at SM Seaside City Cebu on Tuesday, May 4, 2021.

Labella was accompanied by his wife Joy, a senior citizen who was also vaccinated.

Labella said he decided not to receive the vaccine on the same day with Rama, his political ally, saying he wanted other senior citizens to be inoculated ahead of him.

The other reason for the delay in getting himself vaccinated was the issuance of a medical certificate by his doctor stating he was in tip-top shape to receive the vaccine, Labella said.

After getting jabbed, Labella said he felt no adverse effects.

Before Labella and his wife were inoculated, their vitals had been checked, said City Health Department officer-in-charge Dr. Jeffrey Ibones.

The couple’s blood pressure before the vaccination was in the normal range, 120/80. After the inoculation, the Labellas’ blood pressure did not shoot up, Ibones said.

The Labellas stayed for 30 minutes in the vaccination site for post-inoculation monitoring. They later left as they felt fine.

Labella reminded his constituents who are 60 years old and above and the younger ones not to fear the Covid-19 vaccines.

He also urged his fellow elderly city residents not to abandon health protocols such as wearing masks, observing social distancing and avoiding mass gatherings even if they were already vaccinated.

For his part, Ibones thanked the Department of Health 7 for sending 20 nurses to assist in the vaccination. He also thanked Perpetual Succor Hospital and Visayas Community Medical Center for sending their medical personnel.

Cebu City has around 80,000 residents who are 60 years old and above. Of the elderly population, Ibones said around 30,000 registered for the vaccination, but only around 20,000 of them expressed their readiness to be inoculated.

Ibones said he would be elated if more than 50 percent of Cebu City’s elderly population would be vaccinated.

Aside from Cebu City, the cities of Mandaue and Lapu-Lapu also resumed their vaccination efforts on Tuesday, May 4, after receiving their stocks of Sinovac from the Department of Health 7.

Of the new supplies, 600 doses were allocated for the second doses of medical frontliners and 1,000 for senior citizens, said Subangdaku Barangay Captain Ernie Manatad, chairman of the Vaccine Board.

Manatad said they are inoculating senior citizens in barangays that have yet to start the vaccination, which will end on Friday, May 7.

The Lapu-Lapu City Government received 2,000 doses of CoronaVac, and these new supplies were divided into two batches—1,000 doses are for inoculated persons who have yet to receive their second doses, and the remaining 1,000 doses are for senior citizens and medical frontliners.

Some persons with comorbidities were inoculated in the City’s recent vaccination efforts, but health officials decided they should stick to the current priority list—the medical frontliners and senior citizens. This is because of the limited supply of vaccines, said Grace Mary Chan Carungay, the city epidemiological and surveillance unit officer.