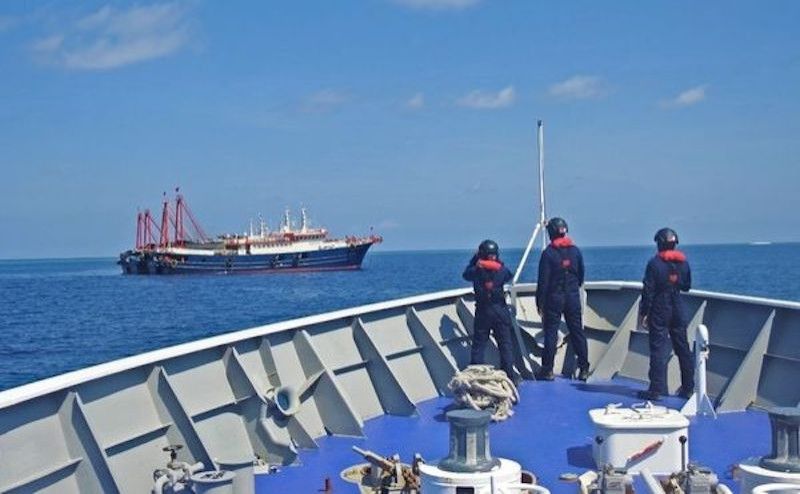 In a report on Monday, May 4, 2021, the NTF said PCG vessel BRP Cabra and two vessels from the Bureau of Fisheries and Aquatic Resources spotted seven Chinese vessels “nested or in stationary linear formation” at the Sabina Shoal on April 27.

The crew members of the BRP Cabra issued a series of radio challenges, reminding the Chinese vessels that they were within the Philippines’ exclusive economic zone.

Without any response, the Chinese vessels dispersed and left about 20 minutes later.

The Chinese vessels left the area as soon as the PCG arrived, the task force said.

In a separate statement, the PCG said they followed the Chinese ships to ensure their departure from the WPS.

He said the task force opposes China’s imposition of a fishing ban in areas within the Philippine territory from May 1 to August 16, 2021. The ban covers the “South China Sea north of the 12th parallel.”

“This fishing ban does not apply to our fishermen and the NTF-WPS opposes China’s imposition of the same over the areas within the territory and jurisdiction of the Philippines,” Esperon said.

“The NTF-WPS reiterates that our fisherfolk are encouraged to go out and fish in our waters in the WPS,” he added.

The Philippines has filed a series of diplomatic protests against China over the presence of Chinese fishing and militia vessels in the WPS.

China claims sovereign rights over around 90 percent of the South China Sea, including parts of the WPS, based on its nine-dash line. These claims were rejected in a 2016 arbitral ruling that favored the Philippines. (SunStar Philippines)