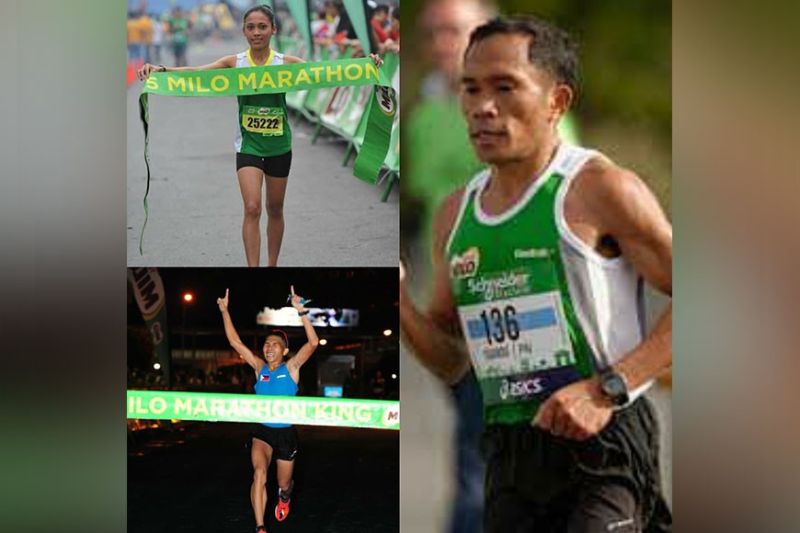 MILO MINDANAO CHAMPS OVER THE YEARS. The champion journeys of (from top left) Christine Hallasgo, (bottom left) the late Rafael Poliquit, and (right) Eduardo Buenavista, were all thanks to the National Milo Marathon, which has been building and fulfilling dreams of athletes like them over the years. (Milo Photo)

What an apt tagline since the country has seen the rise of running champions from this beautiful island of Mindanao -- the likes of Eduardo "Vertek" Buenavista of South Cotabato, Christine Hallasgo of Bukidnon Province, and the late Rafael "Master Endurance" of Tagum City, Davao del Norte over the past decades.

Their champion journeys with Milo have proven that Mindanaoans, with their sheer indomitable spirit, natural gifts, and passion, are no pushovers at all.

Vertek, now 42, has indeed come a long way from that diminutive teenage boy who used to walk and run his way to school at Sto. Niño National High School from his home in Barangay Teresita, Sto. Niño in South Cotabato and vice versa. This daily home-school-home routine has led him to start running and win in the school intramurals for the first time at age 16 and went on to win three gold medals in the 1997 Palarong Pambansa.

He dropped out of college and was enlisted as a soldier-athlete of the Armed Forces of the Philippines (AFP) in 2000, in the same year when he made his Olympic debut and finished 37th in men's 3,000-meter steeplechase in Sydney, Australia. The following year, he clinched two gold medals in 3,000m steeplechase and 5,000m run in the Kuala Lumpur SEA Games.

He then tried his luck in joining his first qualifying leg in the 26th National Milo Marathon (NMM) in Manila and then later crowned himself the new Milo marathon king in 2002. But lo and behold! He collected four more NMM national finals titles in 2008, 2010, 2012, and 2013.

Now, after two Olympic stints and five SEA Games golds, he is passing on the torch to his long distance runners in the national team, among them are 30th SEA Games 2019 women's marathon gold medalist Christine Hallasgo and 30th SEA Games 2019 men's 5,000-meter bronze medalist Sonny Wagdos of Davao City. His young two sons, Eduard Josh and Eduardo Jr., are also into running. His eldest also joined the 3K and 5K events of past Milo runs.

Just like her idol coach Eduardo, Hallasgo just walked her way from home to school during High School. She, however, discovered her penchant for running only later.

The year 2019 was indeed a blessing for her. After her painstaking efforts and several attempts, she was at last hailed as Milo marathon queen having upstaged perennial champion Mary Joy Tabal of Cebu City in the final in Tarlac City.

"Dili masabtan akung gibati na kalipay that time kay wala naman ko nag-expect na maabot nako akung dream na mahimong Milo queen (I could not understand my feelings at that time as I was not expecting that my dream of becoming a Milo marathon queen would still materialize)," she told SunStar Davao in a separate Messenger interview.

She also said, "Ang Milo is nagsilbing stepping stone nako for my dreams since pag start palang nako ug running. Kay tungod sa Milo, akong dreams na makaabot kog other places without expenses ug makita nako akong mga running idols sa Philippines is natuman (Milo served as a stepping stone to fulfill my dreams ever since I started running. Because of Milo, my dream of going to other places and seeing my running idols also happened).

Hallasgo, a proud mom of a four-year-old, added, "Milo helps athlete like me to dream and never give up."

Her Milo winnings, according to her, helped her family financially over the years. Her 2019 cash prize was used to construct her home in Bukidnon.

Who could ever forget Rafael "Master Endurance" Poliquit?

He graced the Davao legs of the NMM in the past, and yet despite his stature, Poliquit remained rooted to the ground and took pride in his humble beginnings. He has kept his friendships with Mindanao runners although he was long based in Manila as a soldier and as a national athlete.

This Tagumeño ace failed to don the country's colors in the 2019 Philippines SEA Games as he succumbed to a rare brain infection on April 11, 2019 at age 30.

His good friend Wagdos, who was with him in El Paso, Texas for the Bataan Death March, reminisced, "Lahi ra gyud si Pol, Mam. Labaw na sa training kay patay-patay pud. Grabe iyang dedication sa running (Pol was really different especially in his training where he really gave it all. He was so dedicated in running)."

Indeed, just like Buenavista, Hallasgo, and Poliquit, real champions are built over time. And Milo was a huge part of their champion journeys.