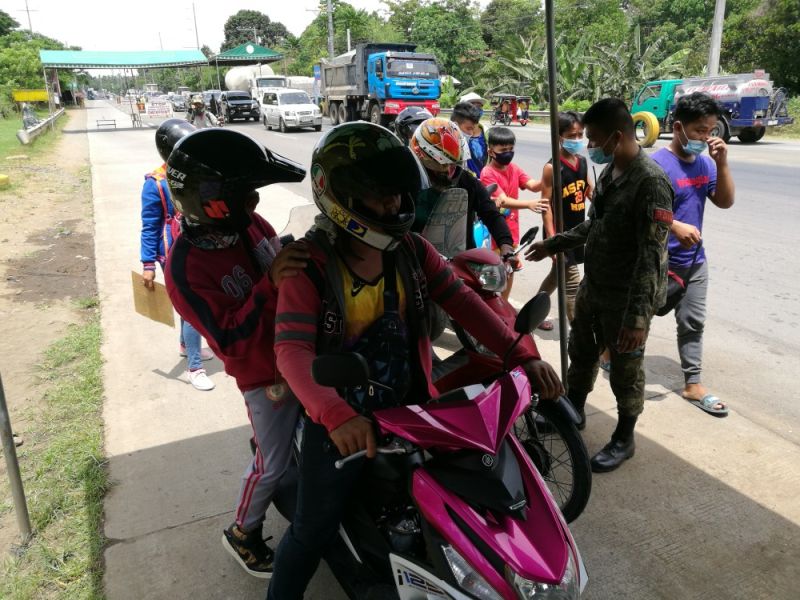 AN OFFICIAL from the Davao Regional Inter-Agency Task Force for the Management of Emerging Infectious Disease (RIATF) and Regional Task Force Against Covid-19 (RTF) has directed all mayors of local government units (LGUs) at the borders of the region to issue their respective executive orders (EO) on region-wide border control measures as soon as possible.

Department of the Interior and Local Government (DILG)-Davao Director Alex Roldan, who is also the RIATF chair, said in a press conference on Wednesday, May 5, 2021, that it is only the mayor of a local government unit (LGU) who has the authority to implement the resolution through an issued EO, including imposing the date of implementation.

"Ang LGU ang naay (The LGUs have the) sole power to implement rules didto sa iyang (within their) [jurisdiction]. Wala man mi (We do not have) legal basis because temporary ra man ang nature aning (because the nature of the) Task Force [RIATF] (is only temporary), that is why it still relies on the LGU to implement it kay sila man naa sa constitution nga gitagaan og (because the constitution gives them the) authority to regulate," Roldan said.

He added that RIATF and Regional Task Force Against Covid-19 (RTF) are only a policymaking body.

Roldan clarified that the tightened border control will not interfere with the LGUs’ existing Covid-19 policies and that mayors are given the authority to add some provisions, provided that they will not stray with what is in the resolution.

"Depende na karon sa local government units kung kanus-a ni siya maimplement (It would depend on the LGUs when they will implement), and how long will it be implemented," the DILG official said.

He said mayors who will not issue their respective EOs will be issued with a show-cause order and will be asked to explain why they did not want to implement it. DILG-Davao may also file a case against them.

This is the reason why they had sought the comment of different local chief executives for the proposed border control and consolidated it prior to the issuance of the resolution to avoid conflicts, Roldan said.

“Pero if dili gihapon sila musunod (If they won’t still adopt the resolution), then something is wrong. They were given the opportunity to comment, then dili gihapon, unsa ba gyud iya gusto? (they would refuse to implement it, then it is their problem),” he said.

He said the majority of the local heads had generally agreed on the guidelines on the border controls.

RIATF-RTF-Davao issued Resolution 01 series of 2021 on May 3, wherein the body approved uniform guidelines to regulate entry and exit in regional borders of the region to regulate movements "as an additional and preemptive measure against the surge of Covid-19 cases in the region."

According to the resolution, tourists and returning residents who are non-authorized persons outside residence (non-Apor) who will enter Davao Region will now be required to secure a negative reverse transcription polymerase chain reaction (RT-PCR) test result.

Section 3 of the resolution states that Apor, who are exempted to the mandatory RT-PCR, includes health and emergency frontline services and uniformed personnel; government officials and employees on official travel and official business; and duly authorized humanitarian assistance actors, especially those transporting medical supplies and laboratory specimens related to Covid-19 and other relief and humanitarian assistance.

Returning residents of the region that are non-Apor need to secure RT-PCR test with an accompanied identification card showing residence or any other proof of residence.

Essential travel of non-residents in the region, which includes access to essential goods and services, medical consultations, etc. will be allowed entry in the region provided that they can present any of the following: proof of appointment; medical prescription/referral; or any other document showing proof of essential transaction.

The region-wide border control is a proactive measure wherein restrictions will be in place to slow down the surge of Covid-19 cases, including the further spread of the new variants in the region.

Roldan said the issued control border guideline is still in accordance with the national Inter-Agency Task Force for the Management of Emerging Infectious Disease (IATF) omnibus guidelines, but the guidelines were revised based on the region's current situation.

The official said the unified border control is in response to various requirements imposed per local government. He said this could hinder the regional economic recovery.

Roldan also reiterated his call to avoid using the term "semi-closed border" and "partial closure or lockdown" to avoid causing confusion and panic.

In his observation, most who complained about the measure are the non-essential travelers.

He said they already coordinated with concerned agencies and border control personnel.