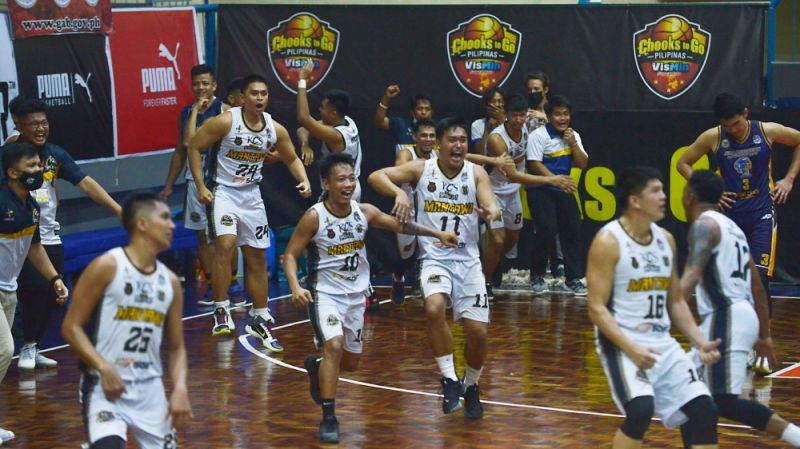 The KCS-Mandaue celebrates after getting the win over ARQ Lapu-Lapu in the semifinals of the VisMin Cup. / Chooks-to-Go

ALCANTARA—The KCS Computer Specialist-Mandaue proved sharper down the stretch, making one clutch basket after another to outlast the ARQ Builders Lapu-Lapu City Heroes, 74-64, in the semifinals and advance to the finals of the Chooks-to-Go Pilipinas VisMin Super Cup on Wednesday night at the Alcantara Civic Center in Alcantara, Cebu.

KCS will now move on to the finals where they will face off against the unbeaten MJAS Zenith Talisay City Aquastars. Game 1 of the best-of-three series is on Friday, May 7.

After a sorry showing in their first match-up on Tuesday wherein he managed a measly five points, Gryann Mendoza bounced back in a huge way as he tallied 25 points—on 5-of-7 shooting from beyond the arc—to go with eight rebounds, an assist, a steal and two blocks.

He also made several crucial plays that stymied ARQ’s comeback attempt from a 15-point deficit in the fourth canto. With KCS on the verge of blowing the game wide open after they erected a 60-45 lead early in the final period, ARQ’s veteran wingman Jojo Tangkay refused to back down and scored nine points in a five-minute stretch to bring his team to within two, 62-64, with just 3:27 to go.

However, Mendoza quickly doused water on the raging fire as he calmly sank a pull-up jumper at the keyhole to raise their lead back to four, 66-62. Then, after ARQ’s Dawn Ochea lost the ball to the baseline, Mendoza drove down the right wing and found a cutting Michole Sorela for an easy two that brought KCS’ lead to six, 68-62, with 1:25 remaining.

Ochea then missed a straightaway three-pointer and KCS guard Ping Exciminiano helped KCS secure the win by dropping a picture perfect dime to Al Francis Tamsi who scored on an undergoal stab that proved to be the telling blow to ARQ’s finals hopes.

Nobody else scored in double-figures for KCS with Tamsi being the next high scorer with seven points along with three rebounds, three assists, three steals and two blocks.

Reed Juntilla led ARQ with 13 points but struggled to find the mark, shooting just 6-of-17 from the field. Tangkay finished with 12 markers while Ochea, who had a monstrous game on Tuesday with 15 points and 16 rebounds, was held down to just 11 points and five boards. (JNP)