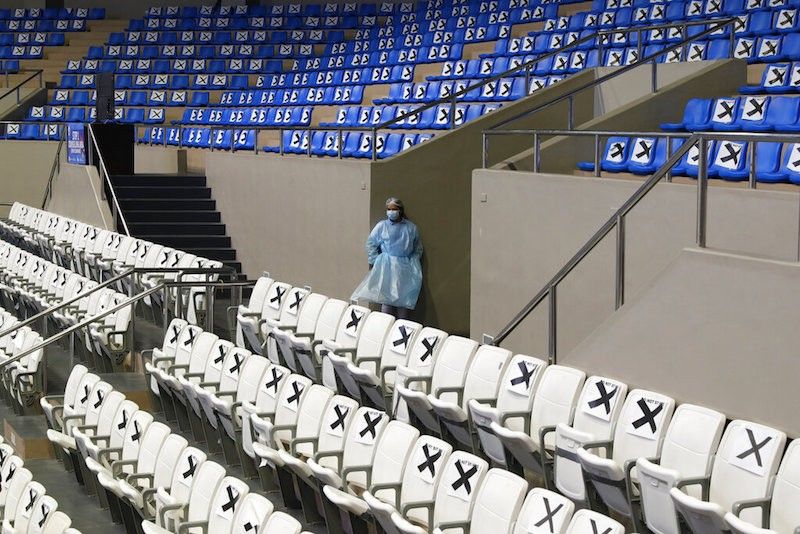 MANILA. A health worker stands beside seats with markers at a vaccination center inside the Makati Coliseum in Metro Manila on Tuesday, May 4, 2021. The Philippines held a dry run of Sputnik V inoculations with the initial 15,000 doses that arrived on May 1. (AP)

A HIGHER number of deaths from coronavirus disease 2019 (Covid-19) on Thursday, May 6, 2021, pushed the death toll closer to 18,000 as recoveries also increased to nearly one million.

In its case bulletin Thursday, the Department of Health (DOH) reported 191 additional mortalities, exceeding the 178 on Wednesday and setting a new high in the last three weeks.

These raised the Covid-19 case fatality rate in the country to 1.67 percent.

At the same time, the DOH bulletin also recorded 6,091 additional recoveries that brought the total to 999,011.

On Friday, May 7, the death toll is seen to breach 18,000 while the number of recoveries is expected to hit one million.

The recoveries were mostly based on the time-based tagging methodology that the DOH has been employing daily since April 18. Under this, mild and asymptomatic cases without Covid-19 symptoms in at least 10 consecutive days are declared as recoveries.

Thursday’s recoveries were lower than the 6,637 new infections.

The new Covid-19 cases on Thursday were also higher than the daily tally in the last two days, which were below 6,000.

The daily positivity rate remained below 15 percent for the third consecutive day. Testing output improved to 44,997, of which 14.7 percent yielded positive results.

Among those sequenced, 1,075 were found to contain the B.1.351 variant (first detected in South Africa) while 948 carried the B.1.1.7 variant (first found in the United Kingdom).

There were also 157 cases of P.3 variant (first found in the Philippines) and two cases of P.1 (first detected in Brazilians).

Only 14 remained active cases as of Thursday while 36 had died and the rest have recovered.

Meanwhile, the number of individuals who have received their first dose of a Covid-19 vaccine has increased to 1,744,649 as of May 4, the National Task Force Against Covid-19 reported.

Of those vaccinated, 320,586 have also received their second dose.

The bulk, or 3.5 million, were inactivated vaccine CoronaVac from Sinovac Biotech.

The Philippines has also received 525,600 doses of AstraZeneca, which were donated through the Covax facility.

As of May 4, 98 percent or 3,970,680 doses have been distributed to 3,505 vaccination sites nationwide. (Marites Villamor-Ilano / SunStar Philippines)