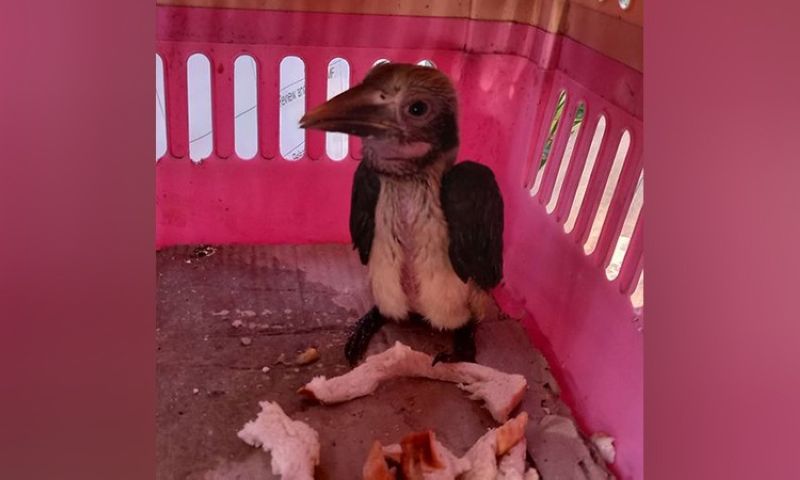 RESCUED. A juvenile and critically endangered Visayan hornbill was seized from a suspected illegal wildlife trader by authorities. (Contributed photo)

Pampanga Provincial Environment and Natural Resources Officer (Penro) Laudemir Salac said they received information that a certain Mike Chua was alleged to be selling a Visayan hornbill through social media, and after confirming it, their team immediately prepared an operation to rescue and save the wildlife.

“Illegal wildlife traders are now becoming smarter and creative by using the internet to sell wildlife and hide this lucrative business from authorities,” he said.

The DENR, in a statement, said that during the operation, police arrested the alleged accomplice of Chua who was identified as Norman Vee Balili, 22, a resident of Barangay Malabanias in Angeles City, for selling wildlife without necessary permit from the DENR.

The DENR and police are now preparing a follow-up operation for the arrest of the mastermind.

Salac said the trading, collecting, hunting, or possessing of wildlife, including their by-products is illegal and against wildlife law.

The DENR is now preparing to file criminal charges against the suspect for violating Republic Act 9147 or the Wildlife Resources Conservation and Protection Act.

Illegal trading of critically endangered wildlife carries a maximum penalty of four years imprisonment and a fine of up to P300,000.

“We are appealing to the public, especially to all netizens to be more vigilant in the social media against online selling of wildlife,” Salac added.

He also appealed to the public to report immediately to the DENR any illegal wildlife selling in their area through their official social media page at @DENRPENROPampanga or hotline number 0945-368-5303.