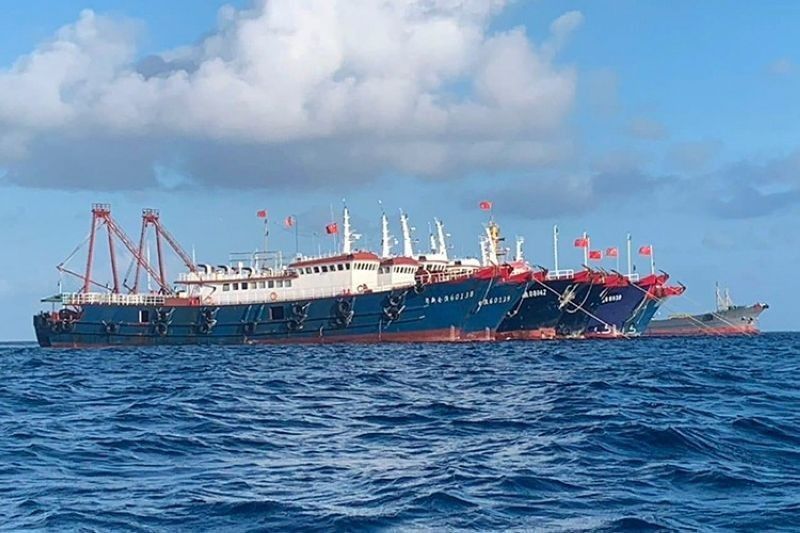 As of April 28, 2021, five Chinese ships have lingered in the West Philippine Sea (WPS), according to the National Task Force for the WPS. (File)

PRESIDENT Rodrigo Duterte reiterated that the arbitral ruling on the South China Sea dispute lacks teeth and could not be enforced.

In another televised briefing Wednesday, May 5, 2021, Duterte said China’s President Xi Jinping had made it clear that “there will be trouble” if the Philippines insists on enforcing the ruling.

"Sabi niya, ‘whatever your claim is, 'wag mong gawin ‘yan.' Why? In whispers ha...'Do not do that because there might be trouble’," Duterte said.

The ruling, issued in July 2016 by the Permanent Court of Arbitration in The Hague, rejected China’s nine-dash claim over the South China Sea and upheld the Philippines’ sovereign rights over the West Philippine Sea.

It was issued after a standoff in April 2012 between Chinese ships and the Philippine Navy at the Scarborough Shoal, known in the Philippines as the Bajo de Masinloc.

Duterte said this ruling is a mere scrap of paper, which he could just throw into the trash.

He reiterated that when he assumed as President in 2016, the Philippines had already lost to China. When both nations agreed to back off and end the standoff, the Philippine Navy left but the Chinese ships stayed put.

Duterte said he will resign immediately if history proves otherwise.

The President has declared that his administration will not go to war with China, but will employ diplomacy in trying to resolve the territorial dispute.

Tension rose in the West Philippine Sea when the Philippines spotted over 200 Chinese ships in March 2021. A series of diplomatic protests have been filed since then.

China insists ownership of part of the West Philippine Sea based on its nine-dash line, which places around 90 percent of the South China Sea under China, including waters separately claimed by the Philippines, Vietnam and Malaysia.

Under the United Nations Convention for the Law of the Sea, nations enjoy the rights to a 200-mile maritime zone regarded as its exclusive economic zone. (Third Anne Peralta-Malonzo / SunStar Philippines)