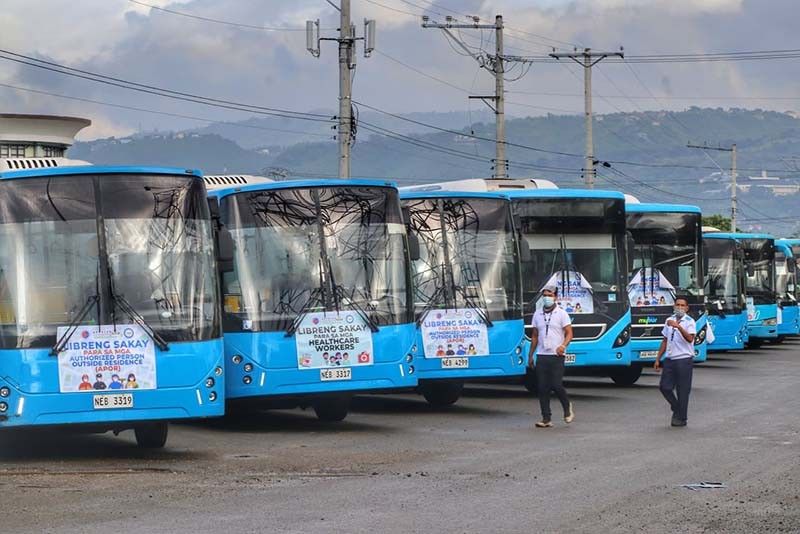 THE Land Transportation Franchising and Regulatory Board (LTFRB) 7 deployed 22 additional public utility buses (PUBs) on Thursday, May 6, 2021, to service health care workers and authorized persons outside of residence (Apor) in Cebu for free under the second scheme of the free ride service contracting program.

The LTFRB 7 partnered with the MyBus, which allocated five PUBs for health care workers that will travel from the City of Naga to the University of Cebu Medical Center in Mandaue City and vice versa.

The launching, which was held at the Cebu South Coastal Road after the inspection of the Metro Cebu Bike Lanes, was attended by key transport officials, including Department of Transportation (DOTr) Secretary Arthur Tugade, LTFRB 7 Director Eduardo Montealto Jr. and Land Transportation Office 7 Director Victor Caindec.

“They (target passengers) should just present their identification card. We are encouraging the health workers and the Apor to please wear their IDs already so we can save time during the loading of passengers,” said Oliver Pulanco, MyBus general manager.

He said they will initially follow the 6 a.m. to 10 p.m. schedule of trips.

On Wednesday, May 5, the LTFRB 7 also launched the free ride service for Apor and essential workers by deploying 54 modern public utility jeepneys (MPUJs) in various routes.

Aside from the 86 buses and MPUJs, he said, they will deploy six additional PUBs for health care workers within this week.

“We will provide free rides on all routes. The free ride still observes the 75 percent maximum seating capacity provided they have barriers (acrylic plastic),” Montealto said.

Random inspection and regular disinfection of the units will also be conducted, he said.

Montealto said they are limiting the number of participating MPUJs and PUBs to at most 100 so as not to hamper the operation of the other regular-operating drivers.

Montealto said most PUBs in Metro Cebu are provincial buses that were deployed to serve the public while traditional jeepneys are being replaced by MPUJs under the DOTr’s Public Utility Vehicle Modernization Program.

There are 700 MPUJs running in the cities of Cebu, Mandaue, Lapu-Lapu and Talisay.

Montealto said the agency targets to have 4,000 MPUJs running in the region by December.

“In Cebu City, we requested if we can pull out 70 percent of our buses, but based on our assessment, that still can’t be done. Our workers are working 100 percent plus our authorized persons outside of residence increased, so our mass transportation really needs to be beefed up,” Montealto said.

Before the coronavirus pandemic, there used to be 3,200 traditional jeepneys in Cebu City. So far, only 468 have been allowed to operate after passing stringent requirements to ensure the units are roadworthy. (WBS, JOB)