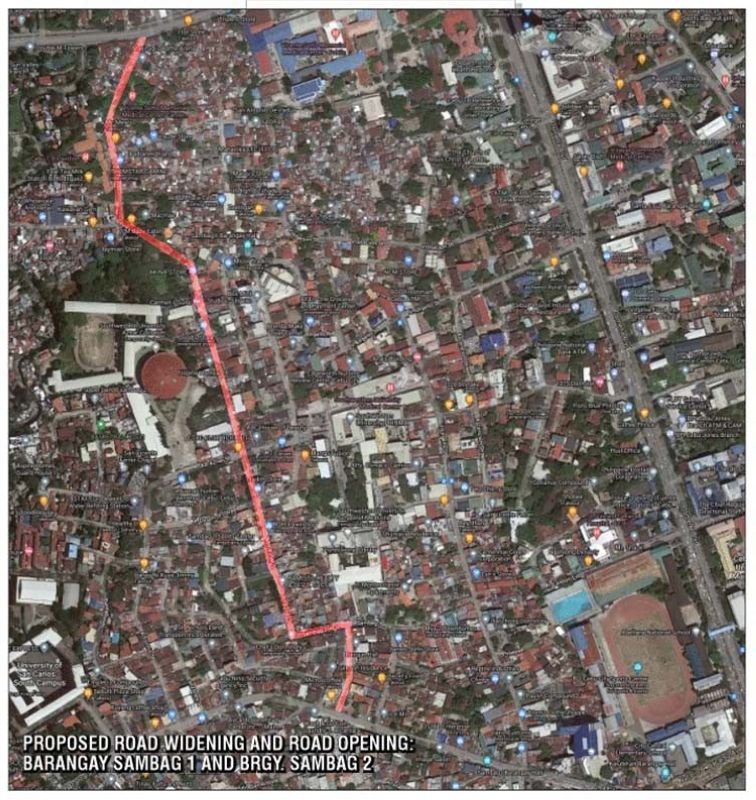 ROAD WIDENING. A one-kilometer, two-lane access road has been proposed to connect P. del Rosario St. and B. Rodriguez St. The project may cost P15 million. It includes a sidewalk and drainage system on both sides. / CITY COUNCILOR JERRY GUARDO

A ONE-KILOMETER access road has been proposed to open the roads between barangays Sambag 1 and Sambag 2 that will connect B. Rodriguez St. and P. del Rosario St.

Guardo said the Department of Engineering and Public Works (DEPW) is now doing the project design for the proposed project.

The entire planning of the proposed project, meanwhile, involves the City Assessor’s Office, Division on the Welfare of the Urban Poor (DWUP) and barangays Sambag 1 and Sambag 2.

Guardo said the proposed project is composed of road widening with sidewalk and drainage system on both sides.

Guardo said the City will reclaim a portion of an existing road in Sambag 2 that has been occupied by informal settlers.

Three houses will be affected once the City conducts the road clearing.

Guardo said the challenge now is there is one property that blocks the road right of way, but the City and the Sambag 2 barangay officials have negotiated with the owner.

So far, according to Guardo, there was positive feedback from the owner.

Once formal and legal documents are finalized for that affected area, the City will proceed with the project within the year.

As for the side of Sambag 1, Guardo said the City can proceed since there is no major problem there.

Guardo said should the City start the civil works this year, the project might be completed in 2022 since there are existing roads on the proposed route.

He said opening a road in the area would help decongest the traffic along Jones Ave. and a portion of Brgy. Calamba, especially during peak hours.

“This will be a huge help because Cebu City really needs more road opening,” said Guardo.

He said there was an exploratory study conducted before, but it did not push through. (JJL)