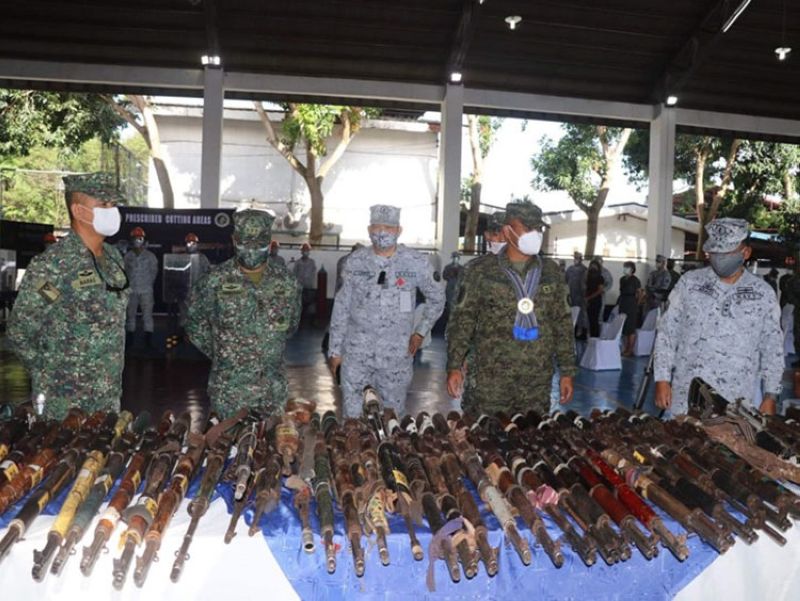 A TOTAL of 219 assorted firearms were destroyed Friday, May 7, by the Naval Forces Western Mindanao (NFWM) in Zamboanga City.

Rear Admiral Toribio Adaci Jr., NFWM commander, said the assorted firearms were accumulated by naval operating units in their various campaigns against terrorism and other lawless groups in Central Mindanao, Sulu, and Tawi-Tawi.

Adaci said the destruction of the firearms, which was held at the Tangan Gymnasium of Naval Station Romulo Espaldon, forms part of the 123rd Philippine Navy Anniversary, which will be commemorated on May 20.

Adaci said that in accordance with prescribed regulations, the firearms were cut into parts using a metal saw and were subsequently disposed to preclude reuse or recycle.

The destruction of the firearms was witnessed by Lieutenant General Corleto Vinluan Jr., commander of the Western Mindanao Command (Westmincom), who was also the event's guest speaker, and other top officials of Westmincom, NFWM, and 4th and 2nd Marine Brigades.

"We are putting beyond use these guns and other weapons of war that we have confiscated through the years of our operations here in southern Philippines with the fervent hope that with no or lesser firearms on the loose will mean a safer environment for all of us. The campaign against illegal firearms, weapons, and ammunition addresses the decades-long armed struggles in strife-torn areas in this part of our country as it seeks to deprive private armed and terrorist groups the tools of war," Vinluan said.

"It also contributes in ending hostilities among warring clans and encourage residents to yield their firearms to authorities in adherence to the law," Vinluan added.

"I congratulate each and every member of the Fleet-Marine Team at NFWM for the operational accomplishments. Behind the display of these recovered and surrendered firearms are stories of heroism and sacrifice by our operating forces. I also wish to thank all our peace partners who continue to support our peace initiatives here in Western Mindanao," Adaci said. (SunStar Zamboanga)