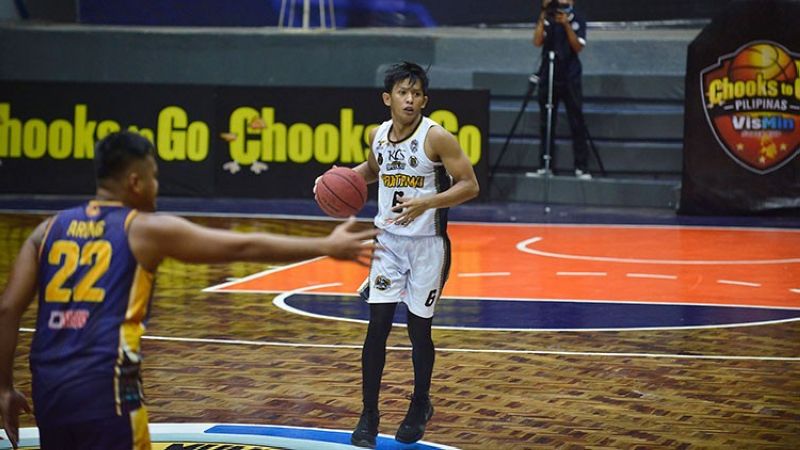 Mandaue's Shaquille Imperial did not wilt under pressure to bring his team to the brink of the Visayas championship in the VisMin Cup. (Chooks-to-Go)

ALCANTARA—The gamble of KCS Computer Specialist-Mandaue guard Shaquille Imperial paid off in a huge way, as his three-pointer with 40 seconds remaining was the difference-maker in their 67-66 upset of MJAS Zenith-Talisay City in Game 1 of the Visayas finals of the Chooks-to-Go Pilipinas VisMin Cup on Friday night.

Down two with under a minute left, Imperial had already missed two wide open shots in the same possession that would have either tied or given them the lead. The reigning CESAFI MVP, though, got another shot when his teammate Michole Sorela grabbed the offensive rebound and swung the ball to him at the left wing.

Other players with weak stomachs would have passed up on the shot. Imperial didn’t, instead embracing the moment presented to him and made it count by swishing the three-pointer that would eventually put KCS on the cusp of the Visayas trophy with Game 2 being played on Saturday night.

Afterwards, Imperial that his confidence was merely a by-product of his own hard work and the trust that his veteran teammates have in him.

As great as it was beating a Talisay side that had previously whooped them in their first two meetings, winning by an average margin of 14 points per game, Imperial said they may have won a battle but the war is far from over.