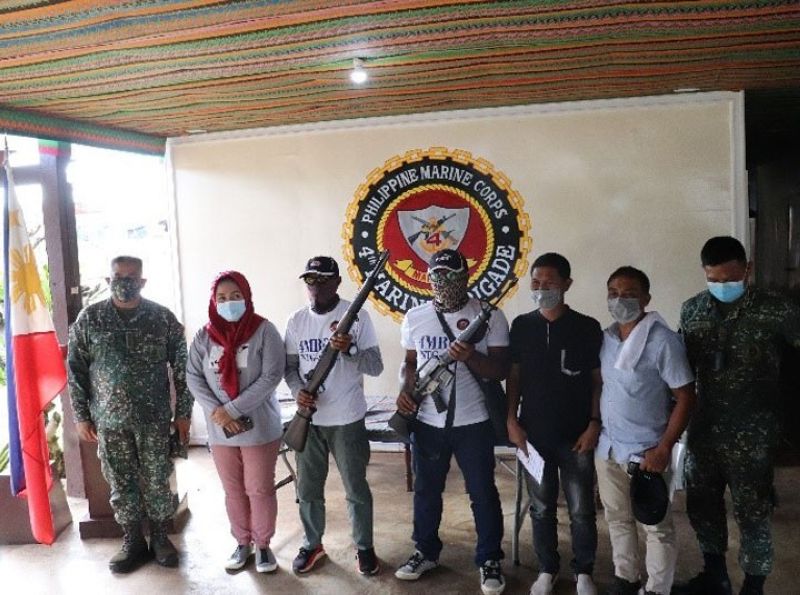 ZAMBOANGA. Two supporters of Abu Sayyaf bandits surrender to government authorities Friday, May 7, in the town of Omar, Sulu. A photo handout shows the two surrenderers (holding rifles) joining military and local government officials in a posterity photo after their surrender. (SunStar Zamboanga)

TWO supporters of the Sulu-based Abu Sayyaf bandits have surrendered to government authorities in that province, the military reported Sunday, May 9, 2021.

Adaci said the two surrendered Friday, May 7, to the Marine Battalion Landing Team-8 (MBLT-8) and yielded a Garand rifle and an M-16 Armalite rifle given to them by Abu Sayyaf leader Alhabsy Misaya.

Adaci said investigation showed the two sought the help of Misaya sometime in 2013 for protection as there was an ongoing clan war involving their family.

The two surrenderers were turned over to the local executives of Omar through Niangkaan village chairperson and the Association of Barangay Council president and in the presence of police authorities in the municipality of Omar.

Colonel Hernanie Songano, commander of Naval Task Group Sulu and 4th Marine Brigade, commended the MBLT-8 troops for their contribution to ending terrorism in the area.

Songano also cited their continuing efforts in convincing more Abu Sayyaf Group members and supporters to return to the folds of the law. (SunStar Zamboanga)