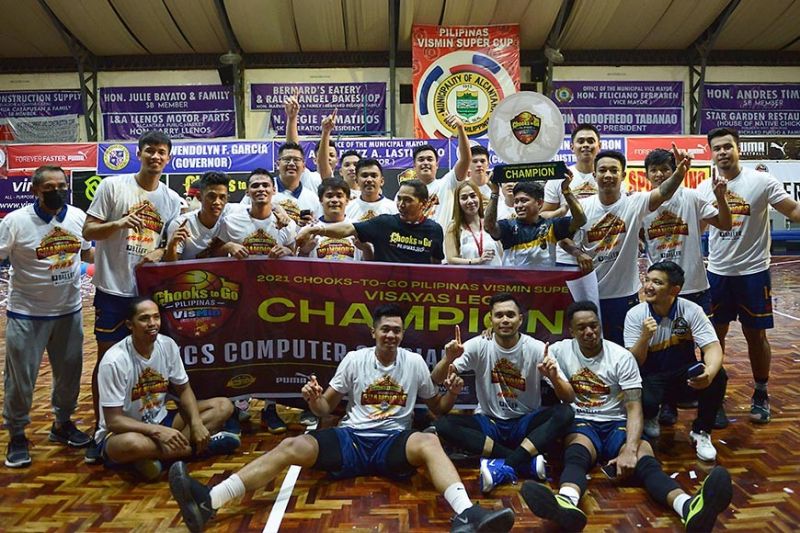 ALCANTARA, CEBU—The KCS Computer Specialist-Mandaue City emerged as the Visayas champions of the Chooks-to-Go Pilipinas VisMin Super Cup after they manhandled the MJAS Zenith-Talisay City Aquastars, 89-75, in the penultimate Game Three on Sunday evening at the Alcantara Civic Center in Cebu.

Down by seven early in the third canto, KCS turned the tables on their heavily-favored opponents, uncorking an incredible 18-1 run capped by a three-pointer by Shaquille Imperial that gave them a 54-44 lead. Bernie Bregondo sparked the turnaround with six straight points inside.

Al Francis Tamsi, Red Cachuela and Michole Sorela and Ping Exciminiano then got in on the act, with the latter draining a triple at the third period buzzer to put KCS in front by 11, 61-50, heading to the final canto.

KCS then poured it on in the fourth with diminutive guard Gileant Delator, at one point, scoring eight straight to give them an 81-64 lead. Sorela then drilled in a long three-pointer and a baseline jumper to give KCS their biggest lead of the game at 22, 88-66.

Conversely, the Aquastars just could not get anything going with sixth man Darrell Shane Menina getting ejected from the game after incurring a flagrant foul on Delator with 5:17 left in the game.

KCS’ championship run was made even more remarkable by the fact that it came at the expense of Talisay City—a team that went unbeaten in the elimination round which included a pair of wins over Mandaue, where they won by an average of 14 points.

Ping Exciminiano, who was named as the Finals MVP, led KCS with 15 points, five rebounds, an assist and three steals. Sorela and Tamsi added 12 markers apiece with the former hauling down eight boards while Delator and Imperial chipped in 10 markers apiece.

Aside from the championship trophy, KCS also bagged the P500,000 cash prize that Chooks-to-Go president Ronald Mascariñas pledged to the winning side.

KCS head coach Mike Reyes relayed after the game that he urged his team to make history, this being the very first season of the VisMin Cup.

“I got to win the hearts of the players. That‘s why they played so hard,” shared Reyes.

And that they indeed did as they kept Talisay’s team captain, Paulo Hubalde, in check all game long. Hubalde managed just four points and committed a whopping five turnovers. Season MVP Jaymar Gimpayan finished with 12 points, most of which came when the result was hardly in doubt.

KCS went down early, 9-17, as Talisay City came out swinging in the first with a 12-0 blast. Cabahug later on drilled two triples to give MJAS their biggest lead of the game at 39-30.

Reyes added that he asked the players if they had anything left in their gas tanks.

“I asked them to dig deeper in your hearts if you can give more and that’s what they did,” Reyes shared as KCS responded with that game-breaking run early in the third.