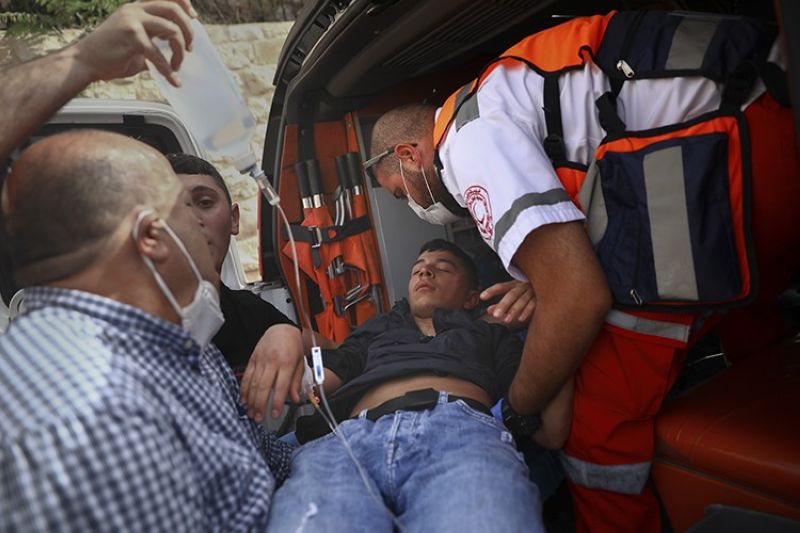 Palestinians evacuate a wounded protester during clashes with Israeli security forces at the Lions Gate in Jerusalem's Old City, Monday, May 10, 2021. Israeli police clashed with Palestinian protesters at a flashpoint Jerusalem holy site on Monday, the latest in a series of confrontations that is pushing the contested city to the brink of eruption. The latest violence at the Al-Aqsa Mosque compound came after days of mounting tensions between Palestinians and Israeli authorities in the Old City of Jerusalem. (AP Photo/Oded Balilty)

JERUSALEM — At least 50 Palestinians were hospitalized after being injured in clashes with Israeli police at a flashpoint Jerusalem holy site, Palestinian medics said. Police fired tear gas and stun grenade canisters some of them landing in the Al-Aqsa Mosqe, Islam's third holiest site.

The latest violence at the Al-Aqsa Mosque compound came after days of mounting tensions between Palestinians and Israeli authorities in the Old City of Jerusalem, the emotional ground zero of the conflict. Hundreds of Palestinians and about two dozen police officers have been hurt over the past few days.

Firas Dibs, a spokesman for the Islamic authority, or Waqf, managing the site, said dozens of people were hurt. The Palestinian Red Crescent said three people were taken to the hospital.

The site, known to Jews as the Temple Mount and to Muslims as the Noble Sanctuary, is considered the holiest site in Judaism and the third holiest in Islam. The compound is the epicenter of the conflict and has been the trigger for rounds of Israel-Palestinian violence in the past.

The U.N. Security Council scheduled closed consultations Monday on the soaring tensions in Jerusalem. Diplomats said the meeting was requested by Tunisia, the Arab representative on the council.

Earlier, police barred Jews from visiting the Al-Aqsa compound on Monday, which Israelis mark as Jerusalem Day with a flag-waving parade through the Old City and its Muslim Quarter. The marchers celebrate Israel's capture and annexation of east Jerusalem in the 1967 Mideast war.

The police decision to ban Jewish visitors temporarily from the holy site came hours before the start of the Jerusalem Day march which is widely perceived by Palestinians as a provocative display of Jewish hegemony over the contested city.

Police have allowed the parade to take place despite growing concerns that it could further inflame the tension.

This year the march coincides with the Muslim holy month of Ramadan, a time of heightened religious sensitivities, and follows weeks of clashes between Israeli police and Palestinians in Jerusalem. (AP)