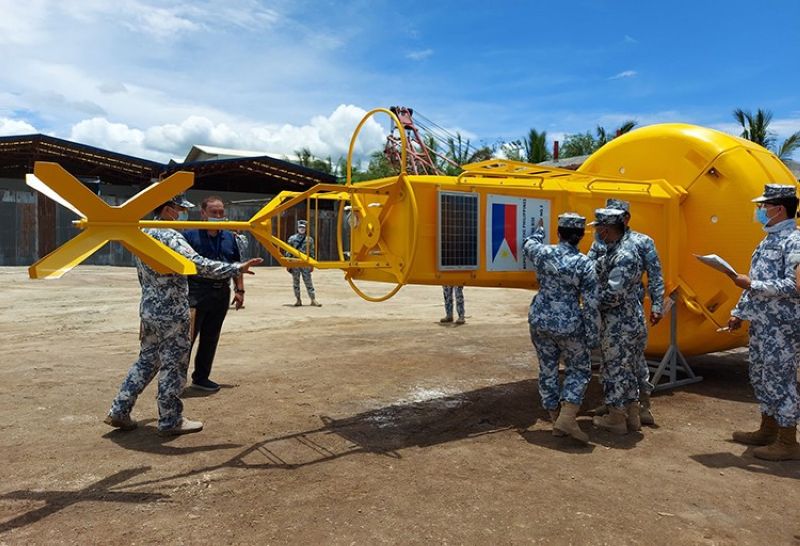 BUOYS. Admiral George Ursabia of the Philippine Coast Guard inspects Monday, May 10, 2021 the modern lighted ocean buoys that were assembled in Consolacion, Cebu. These will be installed in the Benham Rise in Luzon. (Kate F. Denolang)

These buoys will be from the Uni-Orient Pearl Ventures Inc. in Consolacion, Cebu, and the PCG officials inspected the floating devices on Monday 10, 2021.

The inspection was led by Admiral George Ursabia, commandant of the PCG.

The buoys will enhance the capability of the PCG to safeguard, safely mark and enforce activity restrictions in the Philippine Rise.

There will be 10 buoys to be installed in the Philippine Rise and the first three were assembled in Cebu while the remaining seven will be assembled in Cavite later this year.

The Philippine Rise is about 250 kilometers from the coast of Isabela in Luzon, with an area of approximately 13 million hectares. This has a rich biodiversity, including mesophotic coral systems that harbor unique life forms and other rare ecosystems.

In May 2017, President Rodrigo Duterte, through Executive Order No. 25, designated the Philippine Rise as a protected food supply zone, which prohibits mining and oil explorations along with renaming it from Benham Rise.

The installation will allow PCG to mark the area for safe navigation of shipping as it is part of the Philippine territory and jurisdiction with sovereignty on resources and economic rights as approved by the UN Convention for the law of the sea in April 2012.

The buoys are designed and manufactured by the Mediterraneo Señales Maritimas of Valencia, Spain and the parts were delivered to Cebu and were assembled by M-NAV Solutions in Consolacion, Cebu.

Adrian Van Boven, M-NAV equipment specialist, said that aside from assembling the buoys, they will also be the one to deliver the buoys to the Philippine Rise which will take them four days.

Once they arrive at the Philippine Rise, Boven said they will also take part in installing the buoys in strategic areas.

Before the actual installation, Boven said, they will conduct an initial site survey to ensure the depth of 70 to 95 meters and to confirm seabed conditions are suitable for buoy placement through an underwater drone. This way they can avoid disturbing the ecosystem and rare coral formations in the Philippine Rise.

In the installation, Boven assured that the navigation lanterns and the mooring systems, equipped to the buoys will not touch the corals below the buoys.

He said the buoys are designed to withstand weather conditions like 10-meter high waves, 200 kilometers per hour winds, and extreme current in the region.

The buoys can be serviceable for 15 years, he said. (KFD)