Philippines confirms 2 cases of B.1.617 variant 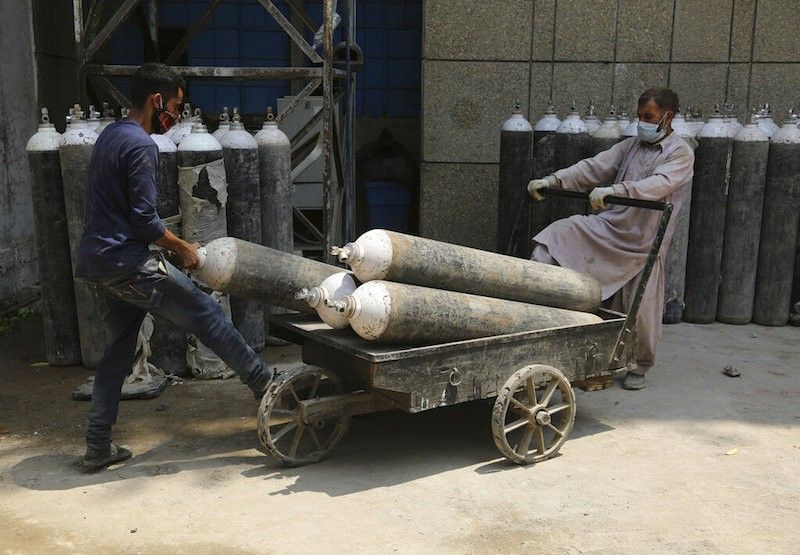 INDIA. Workers carry oxygen cylinders for Covid-19 patients at a government hospital in Jammu, India on May.7, 2021. (AP)

(UPDATED) The Department of Health (DOH) on Tuesday, May 11, 2021, confirmed that the new coronavirus variant B.1.617 first identified in India was detected in two Filipino seafarers who returned home from the Middle East in April.

The confirmation was made roughly a month after the two seafarers arrived separately on April 10 and 19.

In a virtual press conference Tuesday, DOH Epidemiology Bureau Director Alethea de Guzman assured that both cases were contained and neither had any close contacts.

She said the latest genome sequencing conducted by the University of the Philippines - Philippine Genome Center (PGC) on 46 specimens found two samples positive for B.1.617.2, one of three sub-lineages of the B.1.617 lineage of Sars-CoV-2, the virus that causes coronavirus disease 2019 (Covid-19).

Both have completed their mandatory quarantine, have been tagged as recovered from coronavirus disease 2019 (Covid-19), and have gone home.

The patient from Oman, who arrived on April 10, was quarantined in a hotel in Metro Manila. His repeat swab test on May 3 yielded a negative result. He has gone home to Soccsksargen, where he underwent additional home quarantine until May 10.

The second patient arrived on April 19 and was quarantined in a temporary treatment and monitoring facility in Clark. He was tagged as recovered and released on May 6. He has gone home to Bicol.

Meanwhile, the DOH has yet to announce the results of the genome sequencing conducted on the specimens taken from five travelers from India who tested positive for the virus.

The five travelers arrived before a ban on inbound passengers from India took effect on April 29.

The ban, which will last until May 14, has been expanded to include travelers from Pakistan, Bangladesh, Nepal, and Sri Lanka. A possible extension of the ban is under discussion.

The B.1.617, which is believed to be causing the exponential rise in Covid-19 cases and deaths in India, has been classified by the World Health Organization (WHO) as a variant of concern.

It was first detected in India in October 2020 and has since been detected in 46 other countries based on the global genome database, De Guzman said. It contains 15 mutations, including L452R and E484Q, both classified as mutations of significance.

The L452R mutation is associated with increased transmissibility and reduced antibody neutralization, which means the virus may evade antibodies in recovered or vaccinated individuals.

The E484Q mutation, which is similar to the E484K mutation in the B.1.351 and P.1 lineages, may help the virus escape immune response as it increases the virus' capacity to bind with the ACE2 receptor, the enzyme that acts as a doorway that allows Sars-CoV-2 to infect a cell.

De Guzman, however, said further studies are still needed to determine how these mutations affect transmissibility, severity of the disease and vaccine efficacy.

She said a total of 5,952 samples sequenced by PGC as of May 11 have been assigned lineages. About a third, or 34 percent, were variants of concern.

With the additional four B.1.1.7 cases and 23 additional B.1.351 cases, there are now 2,050 cases with these two variants. (Marites Villamor-Ilano / Third Anne Peralta-Malonzo / SunStar Philippines)