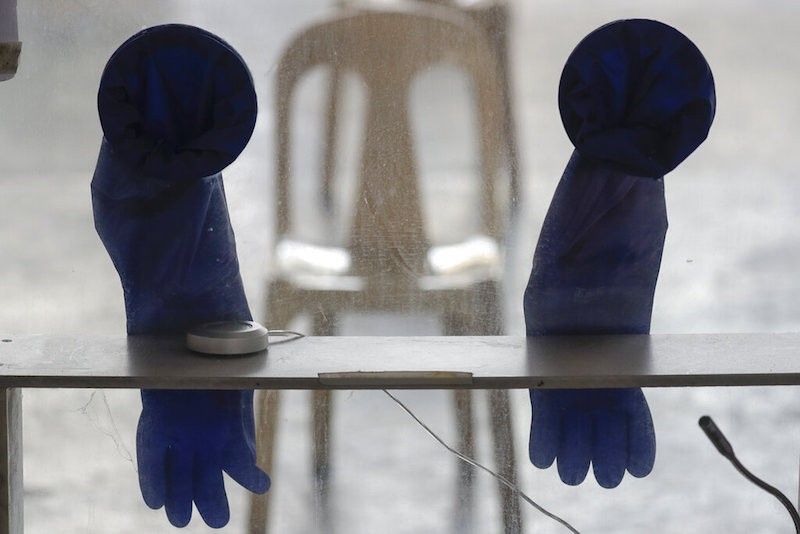 MANILA. Rubber gloves hang on a cubicle used at a Covid-19 testing site to curb the spread of the coronavirus in Quezon City on April 29, 2021. (AP)

AS TESTING output remained low, the number of new coronavirus infections fell below 5,000 in a day for the first time in nearly two months.

The daily positivity rate also went down to 12.2 percent, the lowest since March 16. But there were only 32,205 samples tested on May 9.

The daily death toll, at 59, was the lowest in a little more than a month. These raised the death toll to 18,620. The case fatality rate remained at 1.67 percent.

In his report to President Rodrigo Duterte Monday evening, May 10, DOH Secretary Francisco Duque III said transmission has slowed down nationwide as indicated by a -22 percent two-week growth rate in new cases and a lower average daily attack rate of 6.85 per 100,000 population.

In the National Capital Region (NCR), epicenter of the Covid-19 epidemic in the country, the two-week growth rate declined to -39 percent while the average daily attack rate has dropped to 19.02 from a high of 30.98 per 100,000 population.

“This means that Covid-19 transmission is faster in these regions,” Duque said.

He emphasized, however, that there has been a significant decline in the attack rate in the NCR.

New cases from the NCR now account for about 31 percent of the total cases daily from the previous 48 percent.

Duque also reported that the healthcare utilization rate has continued to decline.

At the peak of the second surge in late March and early April, he said isolation beds were 51 percent occupied nationwide. Occupancy has gone down to 43 percent.

For ward beds, occupancy has decreased to 49 percent from 57 percent, while for intensive care unit (ICU) beds, utilization went down to 61 percent from 68 percent.

Only 40 percent, from the previous 48 percent, of mechanical ventilators nationwide were in use.