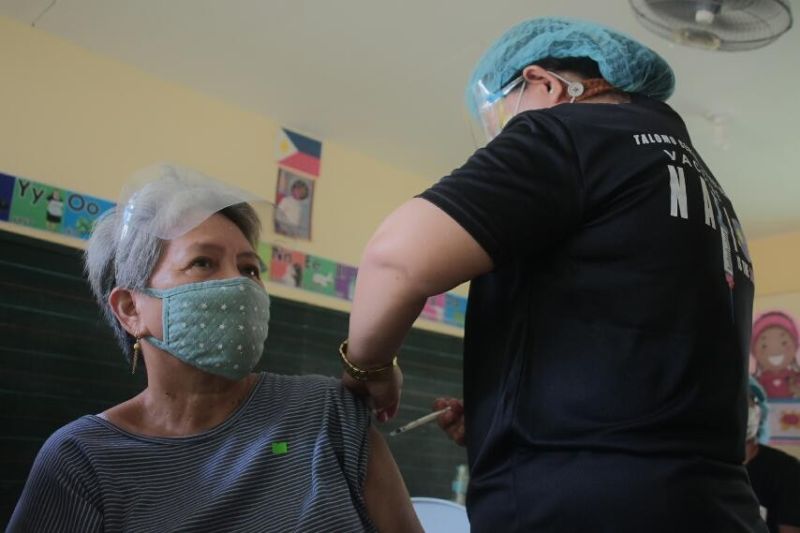 DAVAO City Mayor Sara Duterte-Carpio encouraged senior citizens to get themselves vaccinated against Covid-19, as the city started its vaccine rollout for them starting Tuesday, May 11, 2021.

Duterte-Carpio said in a radio interview on Monday, May 10, that seniors, who are considered Priority A2 should coordinate with their respective barangay and district health offices on how they can access the Covid-19 vaccines.

The mayor clarified that while it is voluntary, she "highly encouraged" them to avail themselves of the vaccine for their protection.

"Because this will help sa atoang (with our) target herd immunity which public health experts say na kung ma-achieve nato ang (that if we can achieve) herd immunity sa tibuok nasud (in the entire country), we can control Covid-19," Duterte-Carpio said in an interview on 87.5 FM Davao City Disaster Radio.

The mayor previously said the city is targeting to inoculate an estimated 1.2 million out of the 1.8 million Dabawenyos in order to achieve herd immunity.

She said majority of those who succumbed to the virus are seniors aged 60 years old and above.

She added that although the vaccines cannot guarantee complete protection from the risk of getting infected, it may reduce the risk of developing a severe infection.

The Davao City Government started its vaccine rollout for senior citizens on Tuesday, May 11, 2021.

The city conducted the first day of vaccine rollout for the A2 group at two venues: SM Lanang Premier and Matina Aplaya Elementary School.

The vaccine rollout at the Calinan Central Elementary School, however, will start on Wednesday, May 12.

Around 200 pre-selected senior citizens were chosen to receive the Covid-19 vaccine in Lanang, while a total of 150 selected seniors in Matina.

All seniors were administered with Chinese vaccine Sinovac's CoronaVac.

Davao City Health Office (CHO) vaccine cluster representative Aldrich So said all seniors who were selected for the pilot vaccination were already contacted by their respective health centers.

Despite not catering to "walk-in" seniors, he said they still entertained their queries on how they can register for the vaccination program.

He said the city is planning to finish the rollout for the A2 group in two months, but there will be an extension if not all targeted seniors will be achieved. But it will depend on the availability of vaccine supplies.

As of now, he said the current number of supplies cannot accommodate the targeted 100,000 seniors for vaccination. But the National Government already notified that they will be shipping more vaccine supplies in the coming weeks.

So said the CHO is planning to mount vaccination sites per 18 health districts to decongest the currently designated hubs.

Meanwhile, he thanked the SM management for allowing the city to conduct its vaccine rollout in their mall.

"It is a very big help to the city of Davao to offer vaccination sites because not all private entities are for free," So said.

He also revealed that some establishments, particularly private schools, offered themselves to the city to become vaccination hubs.

So said the city is open to proposals but they need to check if these areas are suitable for the vaccination.

"Generally what we look at is first, space, is it enough for all the stations we require?" the health official said.

“SM works closely with the Davao City Government to ensure that health protocols are followed during the A2 inoculations for senior citizens 60 years old and above,” Santos said.

He said SM also recently conducted vaccination activity at SM City General Santos City. He added they are expected to achieve the same success in SM Lanang Premier and in SM City Davao in the coming days.

Isa Bathan, 62, former government employee, was one of those who availed herself of the Covid-19 vaccine.

Bathan said she did not have any hesitation of being inoculated with Covid-19 vaccine amid reports that it might have a highly adverse effect on seniors.

"Sa among edad na senior, walay mawala (At our age, there is nothing to lose). Die now, die tomorrow, same die. Kung mamatay mi karon tungod sa Covid[-19] ug tungod sa vaccine, OK lang. Wala man ta kahibalo sa panahon (If ever we would die because of Covid-19 or due to the vaccine, it is OK, because we cannot predict what the future holds)," she said.

Being a pre-medical student, she is aware of the possible side effects she would experience afterwards.

However, after the post-vaccination monitoring, Bathan said she did not manifest any adverse effects, except for the swelling of her shoulder where the vaccine was injected.

Meanwhile, she encouraged her fellow seniors to avail themselves of the vaccines for additional protection.

According to the Interim National Immunization Technical Advisory Group (iNitag), the following are the priority population groups for inoculation: A1: Frontline workers in health facilities both national and local, private and public, health professionals and non-professionals like students, nursing aides, janitors, barangay health workers, etc.; and A2: Senior citizens aged 60 years old and above.