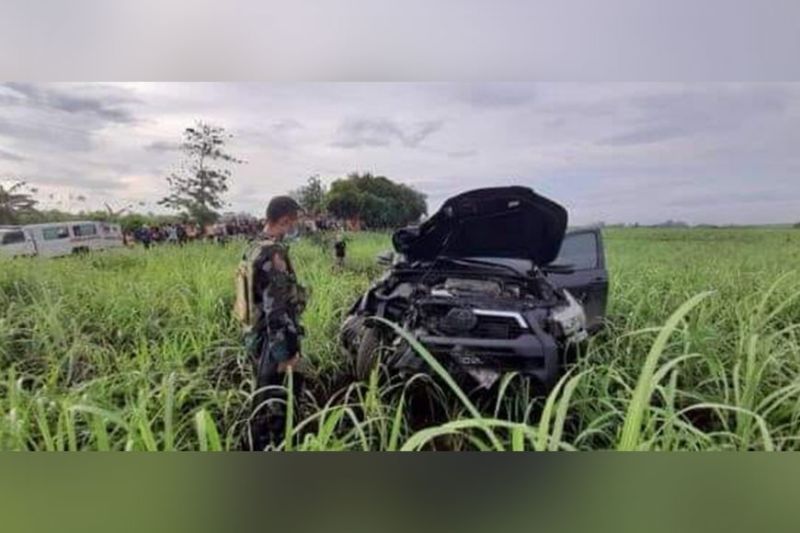 NEGROS. Two siblings died after the motorcycle they were riding on was hit by a pick-up truck along the highway in Barangay Mansalanao, La Castellana on Monday, May 10, 2021. (Photo from La Castellana police)

TWO siblings were killed after the motorcycle they were riding on was hit by a pick-up truck along the highway in Barangay Mansalanao, La Castellana Monday, May 10, 2021.

Police identified the fatalities as Reggie Bingaan, the driver of the motorcycle; and Norla Bingaan, both residents of Barangay Mani-ak, Guihulngan City, Negros Oriental.

Police Captain Rhojn Darell Nigos, town police chief of La Castellana, said the driver of the pick-up truck identified as 35-year-old Alfredo Gonzalgo of Jimalalud town in Negros Oriental was heading to Bacolod City when his vehicle accidentally smashed on to Bingaan's motorcycle, which was headed toward Guihulngan City.

Gonzalgo's vehicle later came to a stop in the sugarcane field.

Nigos said Gonzalgo is claiming that his pick-up truck's brakes failed, causing him to lose control of his vehicle.

The Bingaan siblings were declared dead on the spot after sustaining multiple injuries in their bodies, while Gonzalgo suffered minor injuries in the crash.

Gonzalgo is facing charges of multiple vehicular manslaughter and he is currently detained at the La Castellana Municipal Police Station.