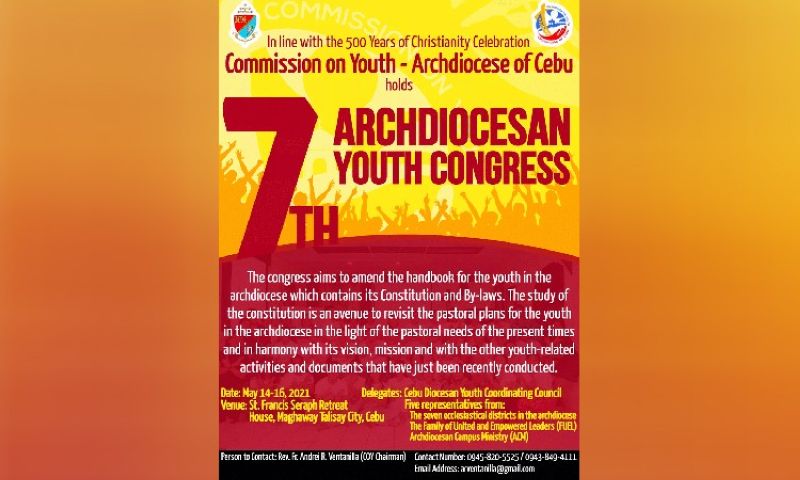 THE Commission on Youth (COY) of the Archdiocese of Cebu will hold a three-day archdiocesan-wide youth congress to revisit and amend the handbook that contains the Constitution and By-laws for the youth in the archdiocese.

The event will be held at the St. Francis Seraph Retreat House in Maghaway, Talisay City on May 14-16, 2021.

Fr. Andrei Ventanilla, chair of the Archdiocese of Cebu-Commission on Youth, said the congress, as part of the commission’s highlights for the 500 Years of Christianity, was supposed to take place last May 1-3, 2020, but it was postponed due to the Covid-19 pandemic.

He said the postponement, though, gave the youth more time to diligently revisit and study the COY’s current By-Laws and Constitution (written in the more commonly known Orange Handbook) in order to revisit, re-align and amend these anew, considering the present spiritual, pastoral, civil, professional, social, moral concerns of the youth in the archdiocese.

Thirteen years have already passed since the last update of the handbook, he said.

"Today, given the speedy progress of technology, rise of rampant issues, with the release of new documents for the young people especially Pope Francis’ Christus Vivit, in celebration of the 500 Years of Christianity, and guided by the constitution’s suggestion to make amendments after two years from the date of its effectivity, the convening of this congress is simply: opportune and timely,” he said.

He also said the study of the constitution is an avenue to revisit the pastoral plans for the youth in the archdiocese in the light of the pastoral needs of the present times and in harmony with its vision, mission and with the other youth-related activities and documents that have just been recently conducted.

The Cebu Diocesan Youth Coordinating Council, who will spearhead the event, and at the same time, delegates of the said congress, will be joined with the seven ecclesiastical districts of the Archdiocese, the Family of United and Empowered Leaders (Fuel) and the Archdiocesan Campus Ministry who will send five official delegates each.

The commission said the congress is a response to Pope Francis’s call to a synodal journey with the young as embodies in his apostolic exhortation, Christus Vivit, and an amplification of the Article 50 #2 of the Second Plenary Council of the Philippines (PCP II), which states that, “Since the youth constitutes a large and dynamic portion... it should be given the fullest attention and highest priority in every way by all in the church.”

"As we celebrate the year-long 500th anniversary of the arrival of Christianity in the Philippines, we hope and pray that our youth, through this Archdiocesan Youth Congress, may be able to strengthen the structure and organization, to continue being missionaries in their own ways, bringing the message, mercy and love of God to their parishes and the community to whom they render their service," the commission said. (WBS/With PR)