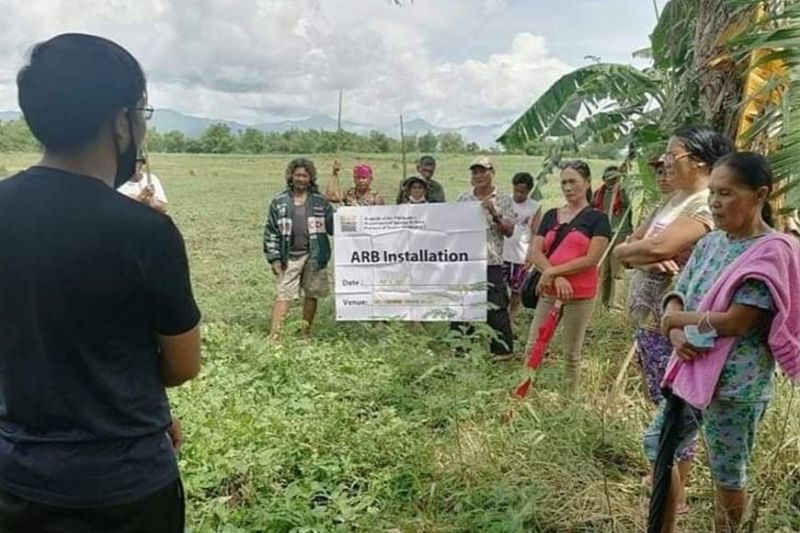 THE Department of Agrarian Reform (DAR) in Negros Occidental-South has installed another batch of 21 agrarian reform beneficiaries (ARBs) in Hinigaran town on Tuesday, May 11.

Municipal Agrarian Reform Program Officer (Marpo) Drexel Glen Pajarilla, who led the activity, said the installation is one of the processes taken by DAR to ensure that farmers shall own, possess, and till the land awarded to them.

Pajarilla said the agency is mandated to physically install the farmer-beneficiaries.

"It is our task to ensure that installed ARBs shall continue to peacefully enjoy their right of ownership and possession over the land awarded to them," he said.

The Marpo also challenged the farmer-beneficiaries to help the agency in its fight against "ariendohanay" system in Negros Occidental.

"Now you have the parcels of land, please make it productive. For sure, starting from now, many of you will be enticed by some individuals to sell or lease the awarded land, however, you must always put in your mind the future of your children," Pajarilla told the ARBs.

He warned them that engaging in such prohibited acts would not solve poverty and it is grounds for disqualification from the program.

For his part, Provincial Agrarian Reform Program Officer II Arnulfo Figueroa encouraged all ARBs to form their own cooperative in order to avail support services from the agency.

"The department will continue to assist our ARBs by providing them various support services like training, farm implements, and access to credit. But in order to qualify, they must be a member of a cooperative or association," he said.

The new landowners now own and cultivate some 17 hectares of the agricultural landholding formerly owned by spouses Rafael and Lourdes Guanzon.

Located in Barangay Camalobalo, it was covered under Carp through compulsory acquisition.