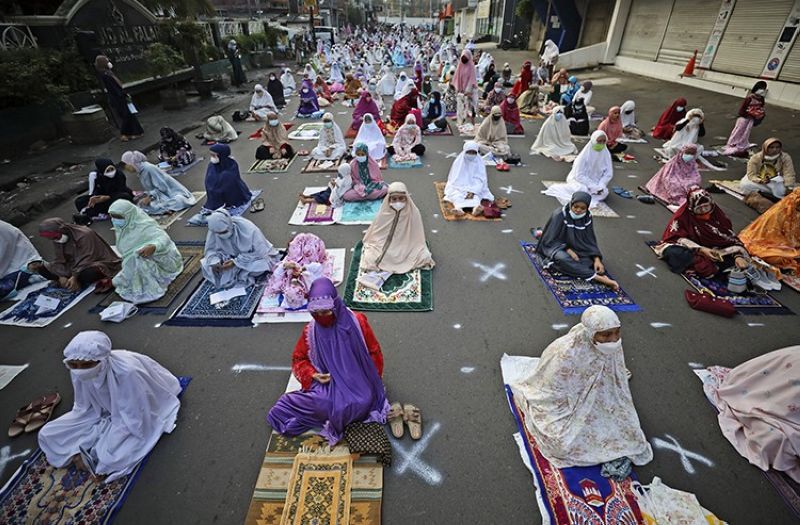 Muslim women sit spaced apart to help curb the spread of coronavirus outbreak during an Eid al-Fitr prayer marking the end of the holy fasting month of Ramadan on a street in Jakarta, Indonesia, Thursday, May 13, 2021. (AP Photo/Dita Alangkara)

JAKARTA, Indonesia — Muslims celebrated Eid al-Fitr in a subdued mood for a second year Thursday as the Covid-19 pandemic again forced mosque closings and family separations on the holiday marking the end of Islam's holiest month of Ramadan.

Worshippers wearing masks joined communal prayers in the streets of Indonesia's capital, Jakarta. The world’s most populous Muslim-majority nation allowed mosque prayers in low-risk areas, but those in areas where there was more risk of the virus spreading closed their doors, including Jakarta’s Istiqlal grand mosque, the largest mosque in Southeast Asia.

Indonesians also were banned for a second year from traveling to visit relatives in the traditional Eid homecoming known locally as “mudik.”

“I understand that we all miss our relatives at times like this, especially in the momentum of Eid,” President Joko Widodo said in televised remarks on the decision. “But let’s prioritize safety together by not going back to our hometowns.”

Despite the mudik ban a year ago, the number of daily cases in Indonesia picked up by 37% three weeks after the holiday. Similar patterns followed other holidays in the country that has counted 1.7 million infections and more than 47,600 fatalities from Covid-19.

With no congregational prayers at mosques, no family reunions, no relatives bearing gifts and cookies for children, “Eid is not a grand event anymore,” Jakarta resident Maysa Andriana said. “The pandemic has changed everything... this is too sad!” she said.

While police set up highway checkpoints and domestic flights and other modes of transportation were suspended, anxiety lingers that people will defy the prohibition. Television reports showed city dwellers hiding on disguised trucks or fishing boats and officers at roadblocks being overwhelmed by desperate motorists.

“We followed the government decision that banned us visiting my parents for Eid last year, it’s enough! Nothing can stop me now,” said factory worker Askari Anam, who used alleys and shortcuts to avoid being stopped from visiting his hometown.

“Of course I’m worried,” he said when asked about possibly contracting the virus. “But I leave it to God.”

Health Minister Budi Gunadi Sadikin expressed concern of a virus spike and feared people would travel despite the ban.

“I hope the increase in transmission cases won’t be happening, but if it will, we’d like to anticipate it,” Sadikin said, adding that healthcare facilities are sufficient. “It is our duty to prepare for the worst situations,” he said.

In the southern Philippines, coronavirus outbreaks and new fighting between government forces and Muslim insurgents in one province prevented Muslim residents from holding large public congregational and mosque prayers to celebrate Eid al-Fitr.

Instead, most hunkered down in their homes for family prayers. In Maguindanao province, many families displaced by fighting in recent days between army troops and the Bangsamoro Islamic Freedom Fighters marked the holiday in evacuation camps.

The country’s volatile south, homeland of minority Muslims in Asia’s largest Roman Catholic nation, has been the scene of decades-long Muslim separatist rebellions although the violence has considerably eased after the largest of several Muslim guerrilla groups signed a 2014 Muslim autonomy deal with the government. (AP)