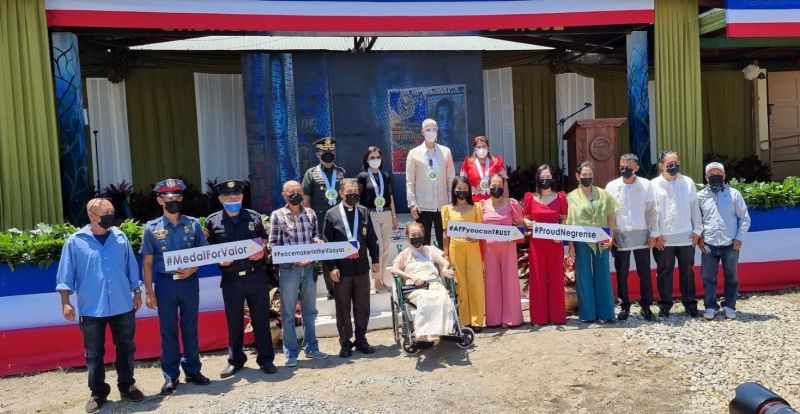 HONORING A HERO. The family of the late 1Lt. Lolinato G. To-ong Sr., led by his mother, Letecia Tingson Grandecila To (seated in her wheelchair), with her offspring, pose for a souvenir snap with AFP Chief of Staff Gen. Cirilito E. Sobejana, Governor Eugenio Jose Lacson and Mayor Rhumyla Nicor-Mangilimutan. (Contributed photo) 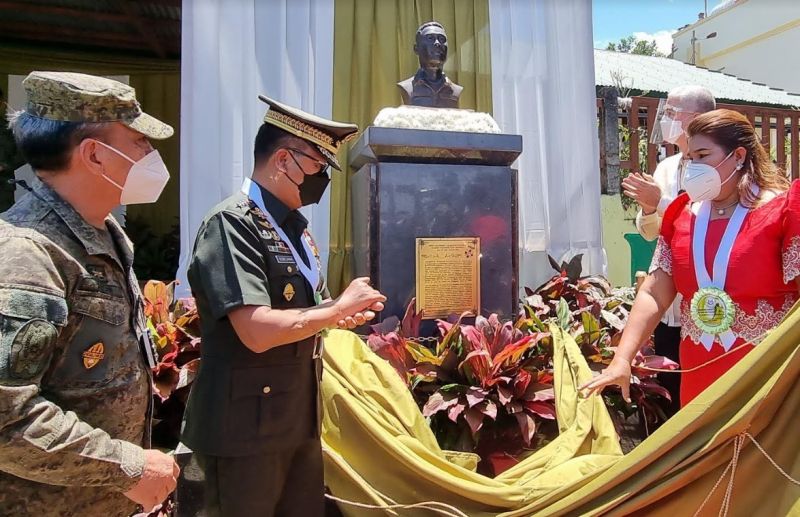 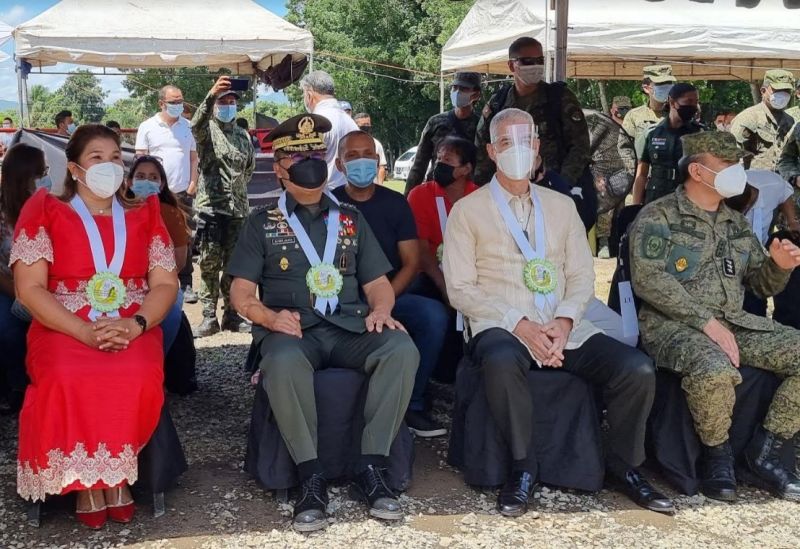 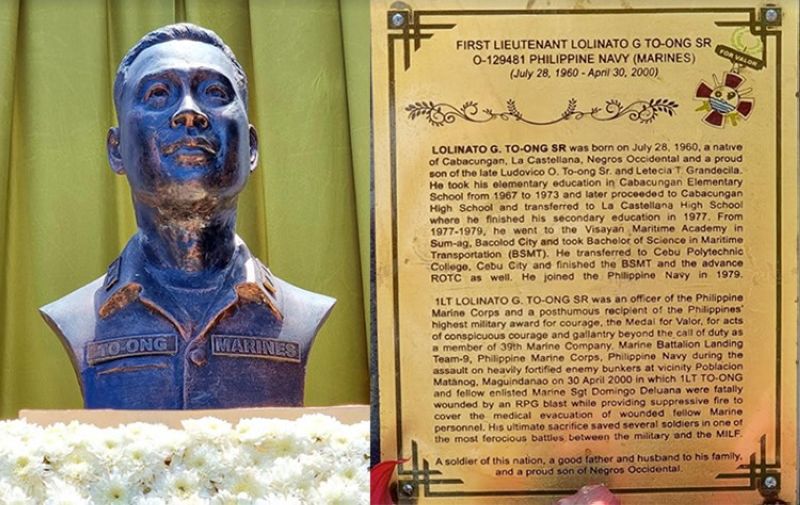 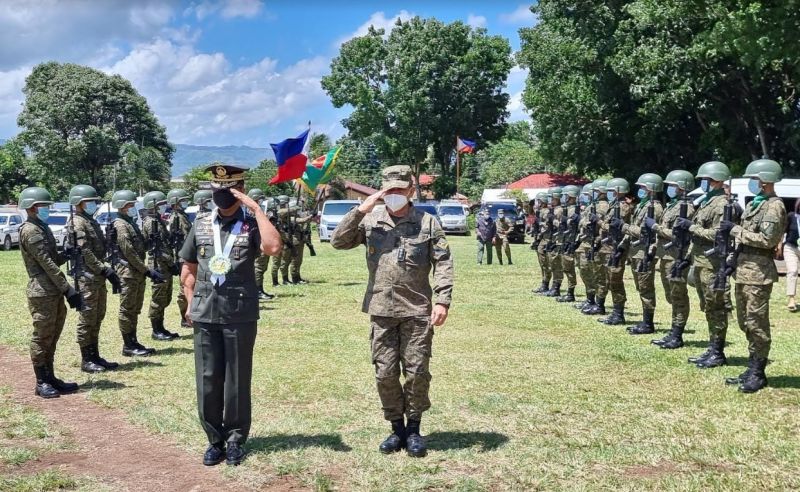 THE late First Lieutenant Lolinato G. To-ong Sr., a native of Barangay Cabacungan, La Castellana, Negros Occidental, has earned the great honor and admiration of his fellow Negrenses for the valor, heroism and sacrifices he exhibited when he battled with his life against the Moro Islamic Liberation Front on April 30, 2000 in Matanog, Maguindanao that saved the lives of his comrades.

No less than the Armed Forces of the Philippines (AFP) Chief of Staff General Cirilito E. Sobejana, with Lieutenant General Roberto T. Ancan and Major General Eric C. Vinoya, as well as Governor Eugenio Jose Lacson, town Mayor Rhumyla Nicor Mangilimutan, members of the Sangguniang Bayan and the family of the late First Lieutenant To-ong graced the unveiling of his bust pedestal located at Cabacungan Elementary School grounds on May 13, 2021.

The occasion was adorned with full military honors given his remarkable valiant deed.

"We honor a true modern-day hero whose gallantry and sacrifice amidst the intense firefight against MILF rebels prevented the enemies which saved the lives of his comrades. With his remarkable courage, it is with great honor that I enjoined the people of La Castellana in unveiling the shrine that will immortalize the heroic deeds of the late First Lieutenant To-ong. It is through the selflessness and fearless dedication of men like him that the AFP continues to attain notable accomplishments in fulfilling its mandate of bringing and securing peace for the people in our communities. The shrine will serve as a constant reminder of the heroism that 1Lt. To-ong has exhibited in the line of duty. May the people of this town -- young and old be filled with immense pride and inspiration knowing that a real hero was born and raised in his town. There is nothing more heartwarming and inspiring than seeing our future generations look up to our Filipino soldiers as their heroes and models," Sobejana said.

Lacson said, "When First Lieutenant To-ong risked his life during the campaign against the MILF rebels, along with the sacrifices of our past and present heroes, it's another proof that the freedom we have is not attained for free, that a lot was paid for us to be in this free and democratic society. To the To-ong family, please know that his fellow Negrenses will take inspiration and will always remember his valiant deed. To quote former US President Barrack Obama, ‘Our nation owes a debt to its fallen heroes that we can never fully repay, but we can honor their sacrifice.’ Let us honor First Lieutenant To-ong's sacrifice by giving back in gratitude, not in words but through our actions, by being conscientious, active and responsible members of our community and society. Let us make the present generation understand that history is not just for some stories of the past, that our history was marked by sacrifices of real people just like us."

Mayor Mangilimutan said, "We are grateful for the initiative of the AFP to honor local heroes who sacrificed their lives to attain common good. Our LGU council passed an Ordinance which was authored by my brother Councilor Añejo G. Nicor, which recognizes the bravery and heroism of true-blooded La Castelleños like First Lieutenant To-ong. This initiative was the brainchild of our former Centennial Technical Working Group Chairperson Quirse Cabales who is the uncle of our guest of honor."

The Covid-19 health protocol posed a challenge for this event. But they were able to make it happen, the unveiling of the Medal for Valor bust pedestal in honor of First Lieutenant To-ong will enable us to reflect on the true meaning of courage, service and selflessness. Attaining the medal of valor is special which is only awarded to the bravest spirit.

“To the people of La Castellana, I am very proud that a La Castelleño was among those who were enlisted in the Hall of Heroes as a recipient of the Medal for Valor. A hero is admired for his bravery and greatness. Each of us has a quality of a hero in our way,” Mangilimutan said.

For his part, Rev. Fr. Ludovico To-ong, brother of the late First Lieutenant To-ong, extended their heartfelt gratitude to those who were instrumental in honoring his brother who died for the country.

He shared that, "When we buried Manong Boyet (First Lieutenant To-ong's nickname) 21 years ago, I was struck by the signage quote in the gate of Libingan Ng mga Bayani that says: ‘I do not know the Dignity of his Birth, but I do know the Glory of his Death.’ I researched and discovered that these words were uttered by Gen. Douglas Mc Arthur on May 12, 1962 when he received the Westpoint's Sylvanus Thayer Award as attribution to the soldiers he led in many campaigns and battles unminding of their life and sacrifices in the name of honor, duty and country. This Code of Conduct attributed to Manong Boyet in the form of the Valor Award being the highest military honor given to him in his military service and heroism, we, as a family, take it not only as a great honor and pride, but a big challenge and responsibility to keep as well. I'd like to personally address this challenge to all young people not only in this barangay but to the whole country as well. We need honorable and heroic people for the good of our land. I'd like to address myself to the younger and succeeding members of our family: to my dear nephews and nieces: this honor brings dignity to our family but at the same time a great responsibility to preserve the legacy that Manong Boyet and Tatay Luding has laid down for us and our country. Please let your children's children know and not forget the triumph your Tito Boyet. May you cherish his memory, heroism and example for the good of our family through dedicated public service for the people and country, so that their sacrifice and heroism will not go in vain.”

“Unfortunate as we are in the pains of the tragic loss of our brother who replaced our father in leading our family, we are consoled by the honor that the government has given to our dear brother and to our family. We express our appreciation, to the gentlemen in the Chain of Command headed by the AFP Chief of Staff. Thank you honorable generals and respected Sirs. We are so elated by the presence of our provincial officials especially the governor,” he added.

“The family feels the overwhelming support for the lady mayor of La Castellana and her Sanguniang Bayan members. Mayor Mhai and members of council and staff, thank you very much,” he said.