AFP chief: We are winning peace 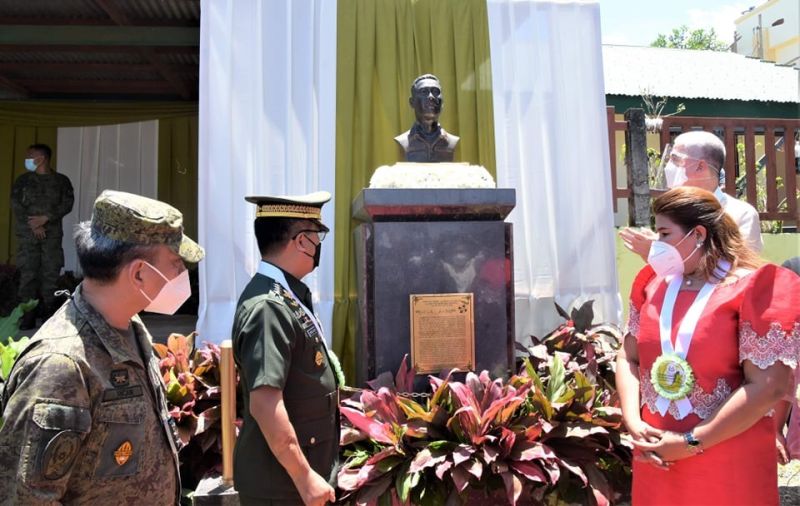 LA CASTELLANA -- The top official of the Armed Forces of the Philippines (AFP), who is a Negrense, said the country keeps on winning peace as it continues to fight against insurgency.

“It is a mechanism of convergence among the security sectors and other partners in the local government as well as the civilian sector including the media that serves as a channel of information for the public to know our peace and order situation,” he added.

Sobejana, who hails from Zamboanguita town in Negros Oriental, was guest of honor and speaker during the unveiling of the marker and bust pedestal in honor of local war hero First Leiutenant Lolinato To-ong Sr. at Cabacungan Elementary School grounds in Barangay Cabacungan in this southern Negros Occidental locality Thursday, May 13, 2021.

The top military official, on the sidelines of the ceremony, stressed “we are winning peace, I should say.”

As he recalled that his military service as an active military officer started in Barangay Cabacungan in 1987, Sobejana said there have been a lot of improvements in terms of the fight against insurgency in Negros Occidental, especially in La Castellana.

A former platoon leader under the Charlie Company of the 11th Infantry Battalion based in the locality, he said the current security situation in the area is far from that over three decades ago.

“During that time, at the peak of insurgency here, we have skirmishes against the New People’s Army (NPA) almost every week,” Sobejana said, adding that “I am happy to see many improvements and developments at Cabacungan and adjoining barangays in La Castellana.”

On the move of the provincial government to create a local peace panel that will initiate peace talks with communist rebels, the AFP head said it is the call of the governor, mayors and even the barangay captains.

“I don’t think that war is the solution to our security problems. There are other dimensions or factors that need to be addressed,” Sobejana said.

He added that “these are the things that need our attention and not war or killing each other. Nobody wins in war.”

For the AFP, it allocated 30 percent of its manpower in supporting local government units in preventing the spread of the virus.

On the ongoing dispute at the West Philippine Sea, meanwhile, the AFP continues to conduct maritime patrol.

All other activities there are under the direction of the National Task Force on the West Philippine Sea.

"The armed forces just contributed the naval and air assets for maritime patrol," he also said.

For her part, Mayor Rhumyla Nicor-Mangilumtan said alongside the goal to achieve a peaceful community, the municipal government is also promoting tourism development in the locality.

Nicor-Mangilumtan said the place should be both presentable and safe for tourists, stressing that “the economic progress in Cabacungan and town, in general, is one of the results of our efforts in winning peace and order here.”

“We continue to call on our rebel-constituents to abandon armed struggle and return to the folds of the law as there’s a government willing to help them,” she added.

Meanwhile, the mayor said Sobejana and To-ong, who are both recipients of the highest military award for courage, the Medal of Valor, are inspirations to the younger generations.

The Barangay Cabacungan native, who died in 2000 at the age of 40, was recognized for “acts of conspicuous courage and gallantry beyond the call of duty as a member of 39th Marine Company, Marine Battalion Landing Team 9, Philippine Marine Corps, Philippine Navy” during the assault on heavily fortified enemy bunkers at the vicinity of Poblacion Matanog.

During the attack, To-ong, who joined the Philippine Navy in 1979, was fatally wounded by a rocket-propelled grenade blast (RPG) while providing suppressive fire to cover the medical evacuation of wounded fellow Marine personnel.

Expressing pride in honoring a war hero from her municipality, Nicor-Mangilimutan said this is a special day to reflect on the true meaning of courage, service and selflessness.

She said there are many various stories of combat but the Medal of Valor is special. It is awarded only to the bravest.

“I am very proud that a La Castelleño is acknowledged on the Hall of Heroes as a recipient of this medal,” the mayor said, adding that “it’s a symbolic event that awakens us, especially our younger generations, that in everything that we do, we should be a hero.”

Sobejana said it is through the selflessness and dedication of men like First Lieutenant To-ong that the Armed Forces of the Philippines continues to attain notable accomplishments in fulfilling its mandate of bringing and securing peace for the people in the community.

"Notably, this shrine, most appropriately constructed within the grounds of this humble institution that nurtures the future generation, be a constant reminder of his [To-Ong] heroism as exhibited in the line of duty," Sobejana said.

Sobejana, who made his comeback in the town after over three decades, said, “it is with great honor that I join the people of La Castellana in the unveiling of this shrine that memorialized the heroic deeds of the late First Lieutenant Lolinato To-Ong Sr.”

Negros Occidental Governor Eugenio Jose Lacson, who was also present at the activity, said "this is our way of immortalizing his valor and heroism both for the present and future generations."

"As a people, we need to have constant reminder of things that are noble and honorable for us to look up to, to value, and to emulate," he added.