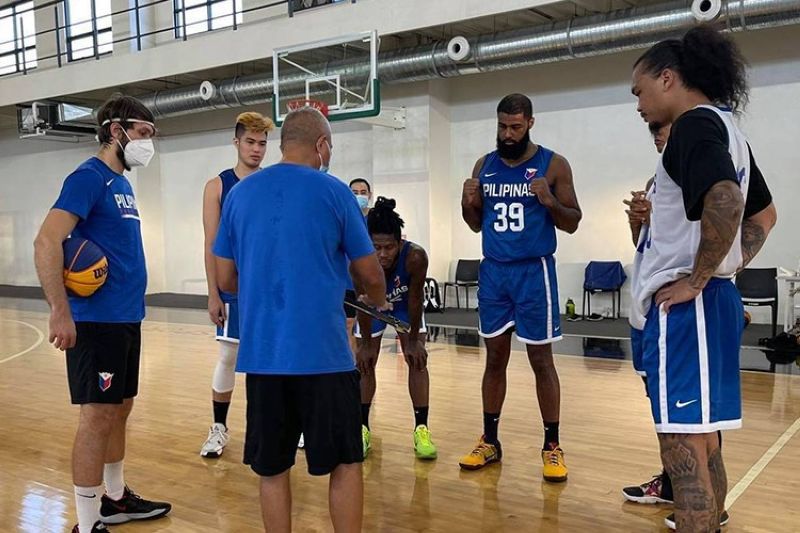 The Gilas 3x3 will be joined by several practice players in their buildup for the Olympic Qualifying Tournament later this month. (Smart Sports)

After taking a break following the conclusion of the first phase of their training camp, the Gilas Pilipinas 3x3 plunge back into action for the final stretch of their preparation for the 2021 FIBA 3x3 Olympic Qualifying Tournament.

The country’s top-ranked 3x3 player Joshua Munzon, Karl Dehesa, CJ Perez, Mo Tautuaa and Cebuano forward Leonard Santillan will re-enter the training bubble at the Inspire Sports Academy in Calamba, Laguna on Friday. Also joining them this time around is Alvin Pasaol after missing the first half of the camp due to health and safety protocols.

The Gilas, though, will have the chance to have some 3x3 scrimmages after the Samahang Basketbol ng Pilipinas invited three practice players in Malick Diouf, Tonino Gonzaga, and Agosto Flor.

"We are looking to simulate the opposition that the Gilas 3x3 National Team will face in the OQT," said Gilas 3x3 head coach Ronnie Magsanoc. "We also want to give our national players the chance to scrimmage with different combinations."

Gonzaga and Flor also helped out Gilas 3x3 during the SEA Games. Gonzaga, a 6-foot-1 forward, has vast 3x3 experience playing for Nueva Ecija in the pro league. Flor, on the other hand, is a lanky 6-foot-2 guard who has been a loyal soldier for Magsanoc.

Diouf, meanwhile, is University of the Philippines' 6-foot-10 Senegalese student-athlete.

Diouf, Gonzaga, and Diouf, along with Dehesa and Santillan, will look to simulate the plays of the country's poolmates in the global meet set for May 26-30, which are Slovenia, France, Qatar, and the Dominican Republic.

With this, grateful is Magsanoc and the SBP to the three practice players for making a sacrifice to help out the national team.

"The SBP is grateful for the time, effort, and sacrifice that the national team practice players are willing to give to help the country in its bid to qualify for the Tokyo Olympics," said Magsanoc, who has Moriah Gingerich as his assistant coach.

"We cannot thank them enough for their valuable contribution to flag and country." (JNP)