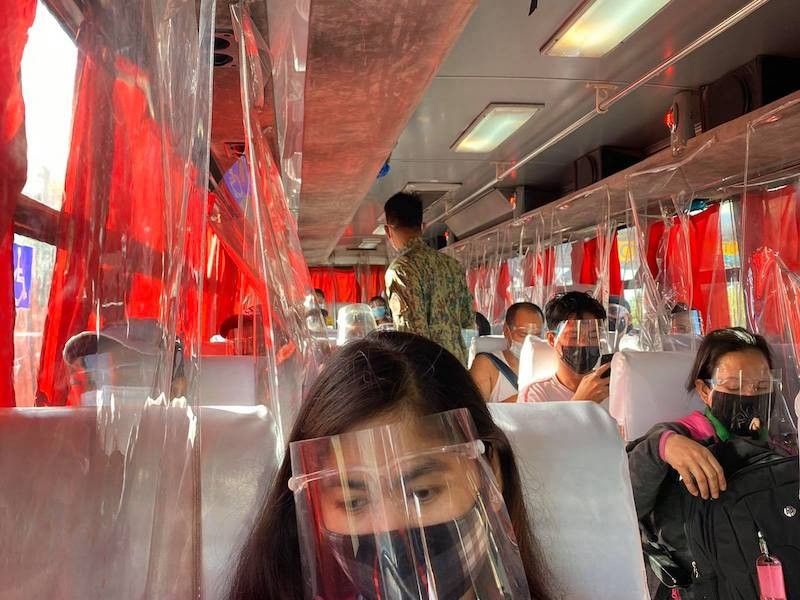 MANILA. In this photo taken on March 29, 2021, a policeman boards a bus to inspect passengers and ensure they are authorized to step out of their homes in Metro Manila. (File)

ON THE eve of the gradual reopening of the economy in the National Capital Region (NCR) plus bubble, the number of active coronavirus disease 2019 (Covid-19) cases in the country increased and the death toll edged closer to 19,000.

The daily positivity rate remained high at 13.1 percent, almost triple the World Health Organization (WHO) guidance of 5.0 percent to reopen the economy.

There were only 2,972 new recoveries, less than half of the new cases, despite the DOH’s time-based tagging methodology that declares mild and asymptomatic cases without symptoms for at least 10 straight days as recoveries.

The new cases brought the cumulative case count to 1,131,467, of which 58,986, or 5.2 percent, were still active cases in hospitals and isolation facilities.

The 137 additional mortalities raised the Covid-19 death toll to 18,958. The case fatality rate increased to 1.68 percent.

DOH Undersecretary Maria Rosario Vergeire said the assessment of experts showed that NCR plus can slowly reopen its economy because they were seeing a downward trend in cases.

"Our average daily cases are decreasing. The growth rate is already in the negative here in the NCR plus," Vergeire pointed out.

She also noted that the healthcare utilization rate in the area has improved significantly.

She said intensive care unit (ICU) bed utilization rate used to be as high as 88 percent in the area, with some cities in Metro Manila reporting full capacity and referring patients to other hospitals in other regions in Luzon.

Vergeire said ICU bed utilization has gone down to 67 percent.

But she said the public should not become complacent.

She said the shift to GCQ is being done to minimize economic losses. The heightened restrictions, especially against non-essential activities, are being imposed to support the calibrated reopening of the economy.

"This is to balance off our economic losses because many Filipinos are already hungry. This hunger and lack of work affect one's health so we really need to achieve a balance (between health and economy),” she said.

The NCR plus, which has a combined population of about 25 million, accounts for almost half of the country’s gross domestic product (GDP).

The NCR alone contributed 32.2 percent to the GDP in 2019, according to the Philippine Statistics Authority.

The provinces of Cavite, Laguna and Rizal belong to Calabarzon, which is the second biggest contributor with a share of more than 14 percent of the GDP.

Bulacan belongs to Central Luzon, the third biggest contributor to the economy with a share of over 11 percent in 2019. (Marites Villamor-Ilano / HDT / SunStar Philippines)