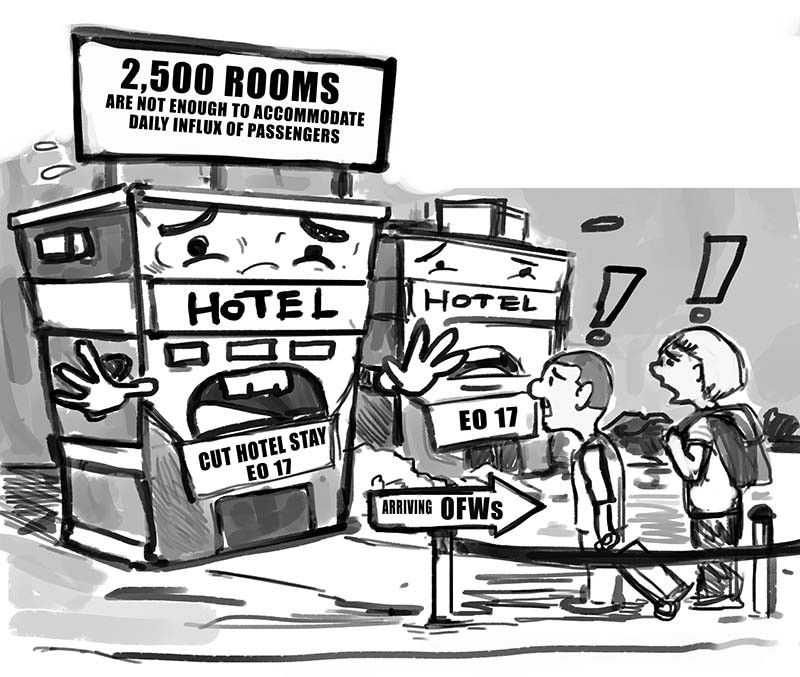 Temporary entry restrictions for international arrivals at the Mactan-Cebu International Airport were implemented to prevent a crisis of sorts from happening.

Apparently, the 2,500 rooms designated for this purpose are not enough to accommodate the daily influx of passengers from abroad.

Earlier in the week, Andrew Harrison, chief executive advisor of GMR-Megawide Cebu Airport Corp., expressed concern that Cebu might suffer from a shortage of hotel rooms if the National Inter-Agency Task Force’s mandatory quarantine of 14 days and RT-PCR testing on the seventh day is implemented here.

The situation could have been worse if the Provincial Government had not scrapped this policy despite the insistence of Health Secretary Francisco Duque III.

Gov. Gwendolyn Garcia signed and issued Executive Order 17, which cut hotel stay for arriving OFWs and ROFs to a maximum of three days.

The governor invoked Section 105 of Republic Act 7160, or the Local Government Code, which states that the national government can only mandate policies on

national health emergencies to local governments within a period of six months.

Cebu and other local government units nationwide are entitled to implement their own policies to suit their specific needs after the prescribed period.

Airport management, too, must have been thinking along this line when it decided not to accept any international arrivals on Friday, May 14, 2021, and Saturday, May 15.

It was acting to avert a potential problem.

The public, especially families of passengers affected by this sudden move, should understand that the decision was not made on a whim.

However, they have every right to be angry since the temporary suspension of international arrivals at such short notice caught many by surprise and it would surely result in some inconvenience.

After all, airports have been known to turn away flights for various reasons, mostly because of inclement weather or obstructions on the runway, but a hotel shortage must be a first.