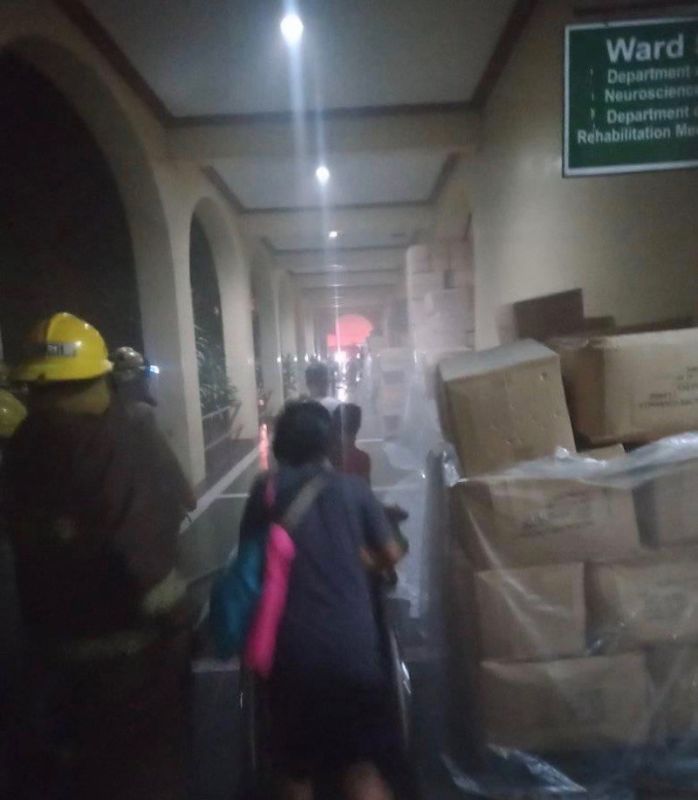 MANILA. Patients are evacuated as firefighters seek to contain the blaze that hit the University of the Philippines - Philippine General Hospital before dawn Sunday, May 16, 2021. (Manila Tondo Fire and Rescue Volunteers)

(UPDATED) Fire broke out near the operating rooms of the University of the Philippines - Philippine General Hospital (PGH) before dawn Sunday, May 16, 2021, prompting staff and responders to evacuate the patients.

The Manila Tondo Fire and Rescue Volunteer Inc., in a Facebook post, said the blaze erupted at around 1 a.m. Sunday. It was placed under control in about an hour. Fire out was declared at past 5 a.m. Sunday.

No casualties have been reported.

Urgent calls for industrial fans to dissipate the smoke and oxygen tanks for the patients were made early Sunday morning by the UP Office of the Student Regent and Tulong Kabataan, a relief and rehabilitation network initiated by the Kabataan Partylist.

Donations of water, face masks and food were also being accepted.

Photos posted by the Manila Tondo Fire and Rescue Volunteer showed smoke filling the hospital’s corridors as patients were evacuated and firefighters sought to contain the fire.

The Manila Public Information Office said 12 newborrns from PGH were transferred to the Sta. Ana Hospital.

PGH spokesperson Dr. Jonas del Rosario said the hospital will not accept admissions and its emergency room will be temporarily closed.

The PGH is a government hospital that serves more than 500,000 patients a year, mostly indigent.

Citing accounts of witnesses, Del Rosario said the fire started at the operating room sterilization area, where linens were kept. This is adjacent to the operating rooms in the central block of the PGH’s pay hospital.

He said the staff’s attempt to douse the fire using the fire extinguisher failed.

Del Rosario said the fire was contained in ORSA but the smoke filled the hospital, affecting event the pediatric and nursery sections on the seventh floor. (Marites Villamor-Ilano / Third Anne Peralta-Malonzo / SunStar Philippines)