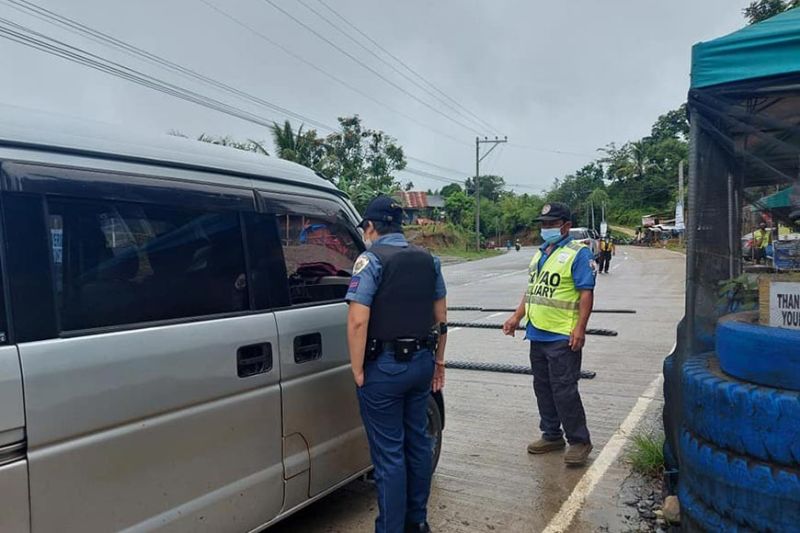 SINCE the tightened regional border controls took effect in Davao City on Friday, May 14, 2021, around 35 vehicles were barred from entering the city, according to the Davao City Police Office (DCPO).

DCPO Spokesperson Captain Rose Aguilar told SunStar Davao in a phone interview on Sunday, May 16, that around 150 individuals were denied entry to the city's regional border checkpoint in Lumundao, Marilog District due to failure to prove that their transaction within the city is essential, and the failure to comply with the mandatory reverse transcription-polymerase chain reaction (RT-PCR) tests taken within 72 hours.

Major Arquimedes Crosby Wesley, Deputy City Mobile Force Company-Davao City Police Office (DCPO) and team leader at the Lumondao Quarantine Checkpoint, said they strictly implemented the order and directed all the vehicles to return to their point of origin, which were mostly coming from Northern Mindanao.

“As of 6 a.m. today (Sunday), 35 private vehicles and six motorcycles coming from other regions were denied entry in Davao City, and in fact, nag-advise kami to return sa kanilang point of origin due to wala silang negative RT-PCR test results and hindi rin essential ang travel nila (We advised them to return to their point of origin because they were not able to present a negative RT-PCR test result, at the same time, their travel was not essential),” Wesley said when interviewed by Superbalita Sunday.

(Davao City police are strengthening their guards at Lumondao, Marilog Quarantine Checkpoint. They check all the papers of travelers. If there is lacking, especially the negative RT-PCR test results, we will order them to return to their points of origin, especially if their travel is non-essential.)

Despite strict enforcement of the regional Inter-Agency Task Force (RIATF) order, Aguilar said the first few days of the implementation was "generally peaceful" and there was no resistance from the land travelers.

"Nakasabot man sila ug nasayod sila nga ing-ana ang sa boarder. Wala man siya nahimong problema (They understood why we are very strict in our borders. That has not been a problem with regards sa denial sa ilahang (on the denial of their) entry," she said.

Meanwhile, Aguilar reminded outside travelers with no important business in the city to cancel their travel due to the strict measures implemented not only in the city but also in the entire region.

Aguilar said those who are authorized persons outside residence (Apor) coming from outside the region and will enter through Davao City must present valid documents as a requirement.

"In the absence of required documents na ginapangayo nato, dili gyud sila makasulod (that we are requiring, they will not be allowed to enter)," the DCPO official said.

The resolution was published on May 3 after the body approved uniform guidelines to regulate entry and exit in regional borders of the region. The guidelines will be implemented by local government units (LGUs) in Davao Region, sharing a border with other regions to regulate movements "as an additional and preemptive measure against the surge of Covid-19 cases in the region."

According to the resolution, tourists and returning residents who are non-authorized persons outside residence (non-Apor) who will enter Davao Region will now be required to secure negative RT-PCR test results.

Section 3 of the resolution stated that Apors, who are exempted to the mandatory RT-PCR, include health and emergency frontline services and uniformed personnel; government officials and employees on official travel and official business; and duly authorized humanitarian assistance actors, especially those transporting medical supplies and laboratory specimens related to Covid-19 and other relief and humanitarian assistance.

Returning residents of the region that are non-Apor need to secure RT-PCR test results with an accompanying identification card showing residence or any other proof of residence.

Essential travel of non-residents in the region, which includes access to essential goods and services, medical consultations, etc. will be allowed entry in the region provided that they can present any of the following: proof of appointment; medical prescription/referral; or any other document showing proof of essential transaction.

Aguilar also reminded land travelers not present fake RT-PCR tests in accordance, or else they will be penalized in violation of Article 172 of the Revised Penal Code or the "Falsification by Private Individuals and Use of Falsified Documents" with a bail amount of P36,000, and Section 9 Paragraph B of the Republic Act 11332 or the "Tampering Of Records Or Intentionally Providing Misinformation" in relation to Executive Order (EO) 63-B with a bail amount of P6,000.

Aside from not being allowed to proceed with their destination, she said they might be detained and penalized.