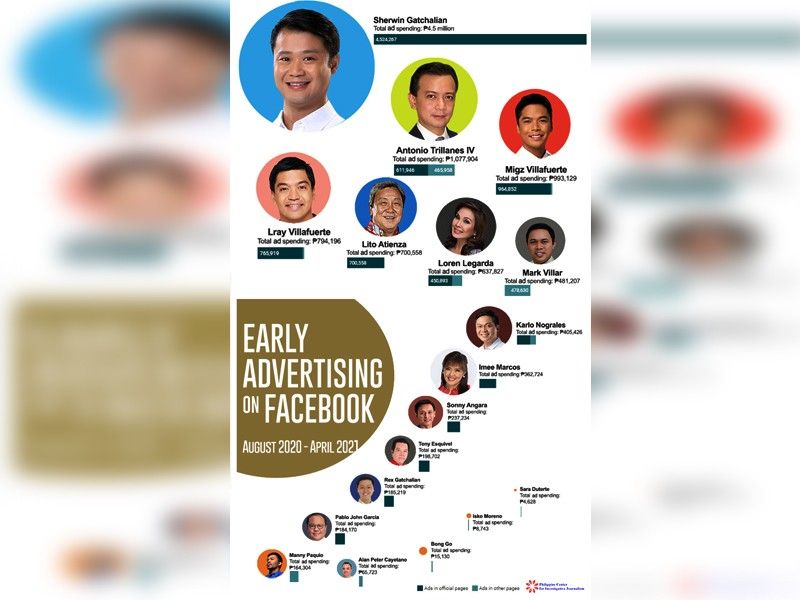 +
A A
-
CHERRY SALAZAR, PHILIPPINE CENTER FOR INVESTIGATIVE JOURNALISM
May 17, 2021

POTENTIAL candidates have started advertising on Facebook more than a year before the May 2022 elections, spending several thousand to a few million pesos since August 2020, data from the social media platform showed.

A significant shift to online campaigning is expected during the 2022 elections, especially with mobility restrictions imposed during the pandemic, although in-person activities will remain a staple of the campaign, according to Eric Alvia, secretary-general of poll watchdog National Citizens’ Movement for Free Elections (Namfrel).

“Less people now read newspapers, and with the shutdown of ABS-CBN, there are less media outlets covering the news. People are gravitating towards social media,” Alvia told the Philippine Center for Investigative Journalism (PCIJ).

Sen. Sherwin Gatchalian has spent P4.5 million boosting more than 600 Facebook posts over the past eight months, while former senator Antonio Trillanes IV and his supporters spent more than P1 million to promote a total of 45 posts.

They are the two biggest ad spenders so far on the social media platform among potential national candidates. It’s an average of P562,250 in ad spending a month for Gatchalian and about P130,000 a month for Trillanes.

Gatchalian’s Facebook ads were mostly about his stand on issues, particularly on the education and energy sectors. These were pushed through Gatchalian’s official Facebook page “Sen. Win Gatchalian,” which has more than two million likes and followers, as of this writing. (PCIJ)